President Greta Van Susteren has succeeded in getting American Marine Sergeant Andrew Tahmooressi released from a Mexican prison. Tahmooressi had been held for over two hundred days after making a wrong turn that left him unable to turn his vehicle around and back across the border. He had three guns in the car, which is illegal in Mexico. He also suffers from post-traumatic stress disorder (PTSD).

The announcement was made at the White House by Vice President Montel Williams and Secretary of State Bill Richardson, along with members of Congress Duncan Hunter, Ed Royce and Matt Salmon and former President Bill O’Reilly. and Sergeant Tahmooressi’s mother, Jill.

The group will be personally escorting Tahmooressi home, where he will meet with President Van Susteren at the White House.

Well, OK. Greta Van Susteren isn’t president, and Montel Williams  isn’t the new Joe Biden, nor is ex-Clinton UN Ambassador Bill Richardson Secretary of State or Bill O’Reilly, who also focused on this situation, an ex-president. Hunter, Royce and Salmon are in fact members of Congress. And yes, Jill Tahmooresi really is Sergeant Tahmooressi’s mother -- and he is in fact now home. 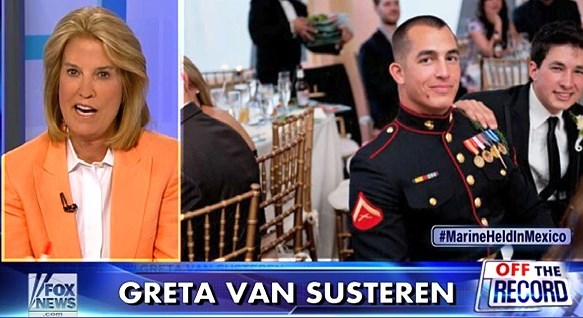 But one can be forgiven if there is some confusion in the Tahmoressi case.

In short? Where was the actual President of the United States? Where was Vice President Biden? Secretary of State Kerry? Why in the world did it take Greta, Montel, an ex-UN Ambassador, three congressmen and Andrew’s mother to do the job that in fact should have been done by the Obama administration?

Van Susteren was a star in getting Tahmooressi released. She was relentless.

Going down to the border she personally drove the route that the American Marine had driven on his fateful trip, illustrating in living color how exactly his mistake was made, how easy it was to make that mistake and showing the utter absurdity of the entire incident. She spoke with his mother, she broadcast from outside the prison, she managed to get through on the phone to the imprisoned Tahmoressi, relaying reports of his brutal treatment at the hands of Mexican authorities. She never forgot him - and neither did her audience.

In fact, the entire incident - its conclusion coming as it does just as President Obama is making it clear he will issue an executive order providing amnesty for millions of illegal immigrants -goes straight to the issue of what exactly the US government was doing to get one of its own citizens out of a clearly unjust and dangerous situation in a foreign country.  A foreign country that is daily allowing  illegals to cross the American border - with a promise of amnesty, not prison, awaiting them. The difference in treatment is startling.

But it begs the question. Why in the world did Greta Van Susteren and all these others have to do the job that the United States government should have been doing?  Certainly we’re not going to be getting an explanation from the Obama White House. Which in itself says something.

Once upon a time America had a president with a very different view of his role in this kind of situation.

In May, 1904, a wealthy 64-year-old American citizen of Greek birth named  Ion Pedicaris - “Jon”  as he was called by friends - was dining at his villa in Tangiers, Morocco with his wife and her 44-year old son from an earlier marriage named Cromwell Varley. Out of the blue screams filled the night. As historian and Theodore Roosevelt biographer Edmund Morris tells the tale, “bandits had invaded his property.”  Pedicaris and his stepson were “beaten and bound”, Varley having his hand slashed. Taken outside to a guard house a Berber named Ahmed ben Mohammed el Raisuli presented himself, saying simply” “I am the Raisuli.”

Raisuli was well known to authorities as the ruler of “three of the most violent tribes in Morocco.” Pedicaris and Varley were being kidnapped. Placed on horses they were whisked off into the night. Pedicaris was soon in worse trouble, his horse stumbling and throwing him, the fall “dislocating a thighbone.”  He was lifted back on the horse and, in agony, the procession continued  until finally reaching a distant village.

As is true today with hostage takers, Raisuli had demands. Several were political, one was for “a ransom of seventy thousand Spanish silver dollars.”  The demands were made to the Sultan of Morocco, but they were finally sent to President Theodore Roosevelt.  Since the demands were technically made of the Sultan, decisions on his response to Raisuli were in the Sultan’s hands. But as to TR, there would be no doubt of his response. Two squadrons of the US Navy, including four battleships, were sent steaming to Tangiers. Altogether the dispatch of “some thirty thousand tons of American gunmetal” was on its way to “persuade the Sultan to start negotiating” with Raisuli. When they arrived, US Marines were dispatched to the Pedicaris villa.

Raisuli had a spy on the ground -- who raced back to “breathlessly” report that the harbor was afloat in US warships. The Sultan was rethinking his position. Eventually, the famous cable from TR’s Secretary of State John Hay, once Abraham Lincoln’s young private secretary, was sent. The cable tersely stated what was expected of the Sultan:  “We want Pedicaris alive or Raisuli dead.” Shortly thereafter, Jon Pedicaris and his step-son were free at last.

Said Pedicaris: “Thank Heaven it is that flag, and that people - aye, and that President, behind those frigates, thousands of miles away, who have had me dug out from amongst these kabyles! That flag an no other!” Would that Sergeant Tahmooressi could say the same about President Obama.

One hundred and ten years later, the case of Sergeant Tahmooressi was different - but not different at all. Like the kidnapped Jon Pedicaris and his step-son Cromwell Varley, Andrew Tahmooressi was being held against his will. While Pedicaris had in fact held Greek citizenship, Theodore Roosevelt knew that the world saw him as an American -- and so the President acted. Personally. He was involved, he knew the details. He authorized the dispatch of Navy warships and US Marines. And he had no hesitation in Hay sending that telegram. It worked.

Today? The President of the United States was nowhere near personally involving himself in Sergeant Tahmoressi’s case. The Obama White House was absent-without-leave.

Leaving it to Greta to play the role of a high-tech Theodore Roosevelt. Instead of Navy squadrons she had television cameras. Instead of sending in the Marines she sent herself. Instead of relying on a “Pedicaris alive or Raisuli dead” telegram she just had the camera focus relentlessly on the way Mexico was treating Tahmooressi. Her viewers chimed in. O’Reilly poured it on.  Montel Williams, himself a true-blue ex-Marine made this his mission, as did the others, not least of whom was Mom Jill Tahmoressi.

And in the end, as with Teddy Roosevelt and the rescue of Jon Pedicaris and Cromwell Varley, Greta Van Susteren was able to free Sergeant Andrew Tahmooressi.

One suspects that it had an effect not anticipated by the Obama White House.  In a mix of headlining events from Ebola to ISIS to the economy to the IRS to Benghazi to all those illegal immigrant kids pouring over the border while Sergeant Tahmooressi was left to the mercies of brutal and corrupt Mexican jailers, the Tahmooressi episode undoubtedly added to the image of a feckless president who was either not in control or totally out of control. Not to mentioned strangely detached from the fate of a U.S. Marine. On Tuesday, a real political price was paid for all of this.  Interestingly? The Pedicaris event played out just as Theodore Roosevelt was being nominated for president at the 1904 Republican National Convention. TR was re-elected that fall of 1904 - in a landslide.

This was an amazing story from beginning to end. A Fox television host launching a determined, relentless and ultimately successful campaign to right an egregious wrong done to an American citizen. It was a stunning success. Good for Greta. And for Montel Williams, Congressmen Salmon, Hunter and Royce, Ambassador Richardson and of course, Andrew’s Mom, Jill. Teddy Roosevelt would love them all!