Time magazine captures the trick exactly. The GOP, it headlines, is “the Party of No.” Worse, says reporter Michael Grunwald, the Party of No has a “Strategy of No.”

Time was and is far from alone in playing this game of portraying the GOP as “the Party of No” in the media. And, of course, liberals from President Obama on down fuel this particular meme, as the President was doing here in this Politico story headlined:

President Obama: GOP ‘says no to everything’

One could go on here..and on. But safe to say, the idea that the GOP and conservatives are always saying no is, in fact, a media invention. Spin. Unless, of course, one considers perpetually moving towards statism is a positive and moving towards freedom is a negative.

Margaret Thatcher wrote an apt description of the British Left that applies as well to the American Left, discussing its penchant for government spending, collectivization, regulation, income re-distribution and all the rest. This is, in fact, the agenda of the liberal media as well.  And to say “yes” to free markets is in fact made into a “no” by the media. So obsessed are liberals in the media with this portrayal that anything that counters the image of the GOP as “the Party of No” is simply not allowed.  Case in point?

The recent revelations of Sharyl Attkisson, the one-time CBS investigative reporter, are very telling in this respect. What Attkisson describes is a major television network whose executives are hard-core Statists, Statists who have made it their goal in life to support and protect Statism wherever and however it appears on the American political scene. If that meant suppressing Attkisson’s various investigative projects that might cast a negative light on a Statist project -- than so be it.

Note this story of Attkisson’s that was reported, amazingly enough, in a Washington Post blog.  Erik Wemple's story involved President Obama’s much-ballyhooed $800 billion stimulus in 2009, a Statist program if ever there was one. The President’s critics insisted -- correctly as it turned out -- that the stimulus was doomed to failure and would spawn all manner of boondoggles. Writes Wemple of an Attkisson investigation:

For instance, Attkisson latched onto a story about how $300 million in stimulus funds had gone to a Korean partnership — Dow Kokam — and a Korean-owned outfit — LG Chem. “The firms used their American stimulus fund to buy Korean technology, equipment, and supplies, and they filled some of those sought-after American stimulus jobs with Korean workers,” writes Attkisson in “Stonewalled.”

“CBS This Morning” declined to air the story.

“CBS Evening News” declined to air the story. The rationale for the decision of the marquee CBS News platform isn’t perfectly clear from Attkisson’s retelling, but she provides some indirect feedback from the show’s then-executive producer, Pat Shevlin. A colleague tells Attkisson that “Shevlin really didn’t have many suggested changes; she just hated the whole thing. She doesn’t like the whole idea of the story. Shevlin feels that even if Koreans were given jobs, some Americans got jobs, too, so she doesn’t think there’s a story.”

In other words, this Attkisson story would reflect negatively on Statism - illustrating by example why these kinds of programs are seen by free marketeers as perpetual failures. So a “no” was given to Attkisson in order to save the Obama stimulus from receiving not just a black eye, but to avoid giving opponents who were saying “yes” to free enterprise any credibility with their criticisms of the Statist stimulus.

All too often leading Republicans or those on the conservative side of the line  will swallow the bait and take up the liberal media chorus themselves.   Louisiana Governor Bobby Jindal has fallen for this business, saying  a while back that -- you guessed it -- he was "calling on the GOP to suggest alternative ideas for healthcare and immigration reform rather than simply defining itself as the 'party of no.'” 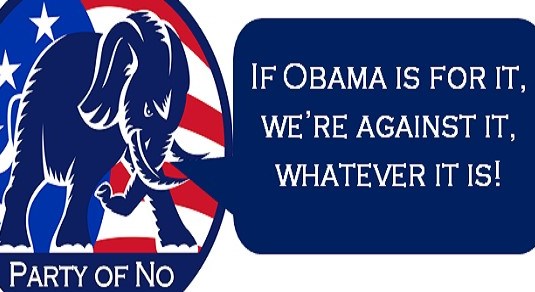 In fact, the GOP has been nothing if not positive on both issues, with free market solutions to health care abounding in the GOP House - and yes, one of them is to repeal ObamaCare. Likewise, the GOP has repeatedly given a hearty thumbs up to border security as a first step to true immigration reform. Yet sure enough, both of these “yes” positions make their way into the media and the language of even some Republicans as a “no.”

Michael Medved, the conservative talk radio host, provides an example of this in The Wall Street Journal, where he wrote a piece saying this of the GOP:

"Their implacable obsession with uprooting Obamacare and their die-hard resistance to immigration reform all but guarantee near-term legislative defeats and long-term devastation to future party prospects....too many conservatives choose to embrace the role of sure losers…”

The idea that “uprooting ObamaCare” is not a positive is an odd thing to believe for a conservative.

Over in USA Today, columnist James Glassman picked up the same dismal drumbeat:

“It is clear that Republicans must be the party of "grow." Unfortunately, we are often seen as the party of "no." There's a wing of the party that has a hard time voting for anything. Some members of Congress want to walk off fiscal cliffs and shut down the government. They say "no" to raising debt ceiling, "no" to repealing taxes like the one on medical devices (by the bizarre logic that repeal would raise support for Obamacare by eliminating one of its deficiencies), "no" to immigration reform (because the president will simply pick and choose the provisions he wants to enforce), "no" to trade negotiating authority (again, we can't trust Obama), and on and on.”

Catch that line from Glassman? “Unfortunately, we are often seen as the party of "no." There's a wing of the party that has a hard time voting for anything.”

Really? “Seen as the party of no”…by who? The liberal media? For whom anything less than slavish devotion to Big Government is seen as a negative? To vote “no” on anything is in fact to say “yes” to something else. Yet Glassman, like both Jindal and Medved, is buying in to the media myth of the GOP as the “party of no.” In fact, standing up for principle - even when losing - is a definitive way of saying “yes.” Yes to principle, yes to a positive resolution of issue A,B or C. Just a different resolution than is favored by Statists.

One of the reasons for the enduring popularity of Ronald Reagan  was his willingness to say yes to principle - no matter how the media would spin it. Case in point?

In 1987, Democrats controlled both the House and Senate. They passed what they called - and the media picked up the term - a “Clean Water bill.” Reagan studied the bill and was appalled to see that under the guise of environmentalism the bill in reality was loaded with pork. He made up his mind to veto the bill. His problem?

With the media leading the way charging Reagan as saying “no” to the environment, a Reagan veto would without doubt be overridden. He summoned House Republicans to the White House, only to find them so terrified of being labeled as anti-environment -- the party of no -- that they were going to join the Democrats in overriding Reagan’s veto. They pleaded with him not to do something so negative. Reagan’s response is fortunately preserved in his diary.

“A meeting with Repub. Cong. Leadership. I pitched a plan that they stand together so that even with Dem’s out voting us we can point out to the people how different the Dems and Repubs are. I don’t think they got the message. In the House today only 26 Republicans supported my Veto of the Clean Water Bill.”

In other words? Reagan saw his veto not as “no” to the environment, much less as a “no” to “clean water.”  Rather he saw his veto -- a certain losing proposition -- as a decided “yes” to fighting wasteful government spending, and he insisted on making his views crystal clear. Specifically because he believed that in doing so he could “point out to the people how different the Dems and Repubs are.” He was, as always, positive, upbeat and forward looking -- and simply refused to play the media game that he was somehow saying “no” to  environmental issues. Not to put too fine a point on it, but when he left the White House Reagan had an approval rating of 63% - precisely because he paid no attention to what the media was saying about “the party of no.”

The real problem here for the GOP is that in swallowing the media description of Republicans as the “party of no” all too frequently this drives some to become what Mark Levin describes in Liberty and Tyranny as the “neo-Statist.” Neo-Statists being those “who would have the Conservative abandon the high ground of the founding principles for the quicksand of a soft tyranny.” Whether the description is “neo-Statists” or the more political “me too” or “dime store New Deal” Republican, all flow from an almost paranoid desire of some Republicans to escape the label of always saying “no.” Escaping by supporting the enlargement of the State. Which, in reality, is a yes vote for limited government.

As the election season draws to a combative end, the charges fly again in the media that the GOP is the “party of no.”  It’s time -- past time -- for Republicans to grow some backbone on this media hype and call it exactly what it is: spin.

And Statist Spin at that.