You won't have Nixon to kick around anymore, Richard Nixon famously declared after losing the race for governor of California in 1962. Little could he have known that liberals would delight in kicking him about in perpetuity, regardless of whether he deserves it.

Latest example of the beloved left-wing pastime of Nixon-bashing based on left-wing mythology that can never die -- Rachel Maddow dusting off the moldy oldy of Nixon's alleged "secret plan" to end the war in Vietnam, purportedly divulged while Nixon was running for president in 1968.


Problem is, Nixon never said. Doesn't matter to Maddow, she of the self-proclaimed but otherwise seldom seen "obsessive" devotion to accuracy. Maddow made the claim on her MSNBC show last night while describing President Obama's concern after he took office that the war in Afghanistan could go the way of Vietnam --

The Obama administration accidental book club that broke out in 2009 was over this book -- "Lessons in Disaster" by Gordon Goldstein. It's a book about what happened in Washington to make the Vietnam War such an American disaster. It's told through the lens of the man who was national security adviser to both JFK and Lyndon Johnson. The bottom line of the book is that Johnson escalated the Vietnam War even though he didn't want to, even though he didn't have to, even though he shouldn't have, and had Johnson not been president, had he not been in a position to make that mistake, had John F. Kennedy not been assassinated in 1963, the huge escalation of that war, that ballooning failure of American involvement in that doomed exercise, it wouldn't have happened.

And had it not been an avowed communist who gunned down JFK, would his successor have become so aggressive against communists in Vietnam? A question you'll most assuredly never hear asked on MSNBC. Back to Maddow --

Eisenhower was the first president to send troops, or advisers, into Vietnam in the 1950s. After Ike came Kennedy, came John F. Kennedy, sworn in in 1961. And yes, Kennedy did escalate the number of Americans there but it was really after Kennedy was killed in 1963 that the numbers of US troops in Vietnam go through the roof. And it's hundreds of thousands of American troops for years and years and years and an American death toll that hits 50,000 and then keeps climbing. I mean, LBJ didn't want a war in Vietnam, he campaigned against it, he said it was a terrible idea. But once he was president he escalated it like a house on fire.

Nixon said he had a secret plan to end the war. Nixon didn't have a secret plan to end the war and the insanity of that war just dragged on for years and years and years, that escalation that they couldn't get out of. It started in the '50s and didn't end until the '70s and even then it was lost and the president who came after Nixon even made a half-hearted effort to restart it after it was over.

When the Obama administration started in 2009 the new president and his new administration let it be known in ways large and small, including letting everybody know what they were all reading, they were letting everybody know that they were cognizant of the lessons of the escalation in Vietnam. They would not keep dumping more and more live bodies onto a losing fight, to compensate for the fundamental pointlessness of the fight into which those lives were being thrown.

Is Maddow still talking about Vietnam -- or Obama's decision to send more troops to Iraq? (Still awaiting her reportage into the president's apparent investments in Halliburton) --

Students of Vietnam and admirers of JFK say that had he lived, 58,000 Americans would not have died in Vietnam and that war wouldn't have stretched through three separate decades. In the Vietnam analogy the new Obama administration aspired to be JFK, not LBJ. 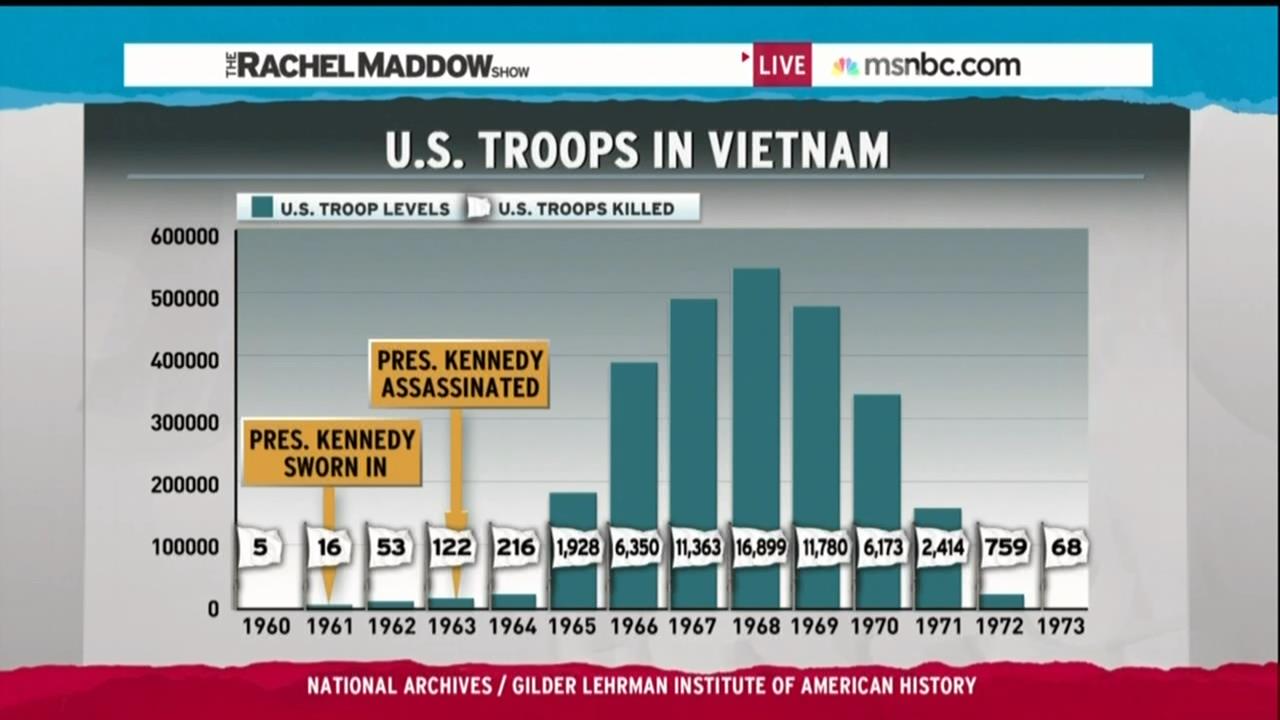 Most amusing here is the chart shown while Maddow prattles, a bar graph displaying US troops levels and combat deaths in Vietnam from 1960 to 1973. Both spike between 1965, the first year of Johnson committing himself to the war, and 1968, last full year of his presidency. But then each begins a precipitous decline in 1969, the year Nixon took office. American troop losses peaked in 1968 at 16,899 and were down to 11,780 in 1969. The following year, that figure was nearly cut in half, to 6,173. By the end of 1972, the number was under 800. One might suspect that some sort of, uh, plan was at work here ...

Which there was, and it was soon dubbed "Vietnamization" -- Nixon shifting responsibility for fighting the communists to the South Vietnamese while the United States gradually withdrew from the conflict. Maddow claims that Obama sought to emulate JFK in seeking to avoid fighting in Vietnam. The better analogy is Obama as Nixon, pulling away from a war -- more than one in Obama's case -- that he inherited.

But Maddow's assertion that Nixon touted a "secret plan" to end the war in Vietnam is left-wing fiction that's been casually tossed about since Nixon was hounded from office for offenses that look trivial compared to the vast money-laundering scheme known as the Clinton Foundation.

The bogus Nixon claim has been demolished more than once by American University communications professor W. Joseph Campbell at his eminently readable blog, Media Myth Alert. Campbell last took a whack at this deserving target in June 2014 after it was cited by a Democrat in the Illinois legislature.

Campbell traced the origins of the spurious claim to Nixon campaigning for president in March 1968 when he declared that "new leadership" would be needed to "end the war" in Vietnam, an assertion that United Press International deemed reminiscent of Eisenhower's vow during the 1952 campaign, with Nixon on the ticket, to end the war in Korea.

Nixon may have been vague in his remarks about Vietnam, but he made no claim to possess a "secret plan" to end the war. He did not run for the presidency by proclaiming that. That much is quite clear in searching a full-text database of leading U.S. newspapers in 1968 -- among them the New York Times, Washington Post, Los Angeles Times, Baltimore Sun, Wall Street Journal, and Chicago Tribune. The search terms "Nixon" and "secret plan" returned no articles during the period of January 1967 to January 1969 in which Nixon was quoted as saying he had a "secret plan" for Vietnam. (The search period embraced Nixon's campaign and its immediate aftermath.)

Surely, had Nixon been touting a "secret plan," the country's leading newspapers would have reported it.

According to an article published March 28, 1968, in the Los Angeles Times, Nixon addressed that notion, stating that he had "no gimmicks or secret plans" for Vietnam. 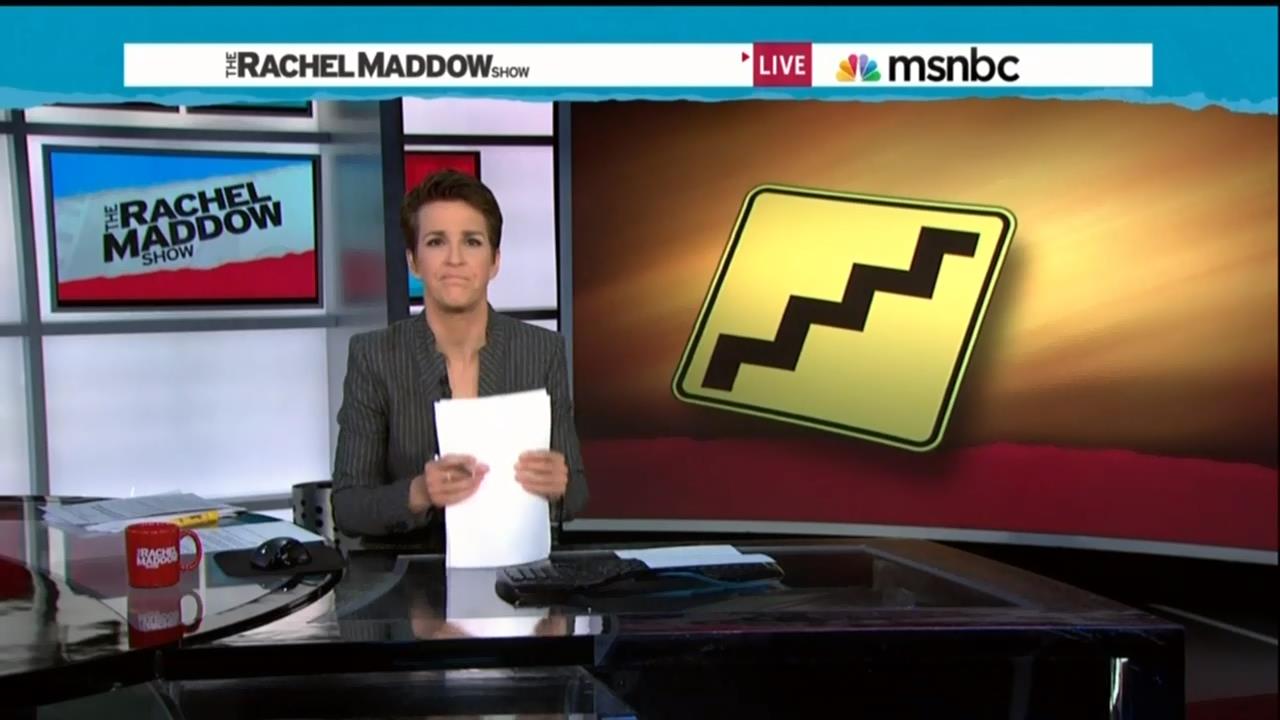 Campbell has also pointed out how an obituary for former White House reporter Helen Thomas in the Washington Post claimed that she'd asked Nixon "point blank what his secret plan to end the Vietnam War was." In reality, as Campbell discovered, Thomas asked Nixon only a week after he took office, "what is your peace plan for Vietnam"?

To recap -- Maddow claims Nixon touted a "secret plan" to end the Vietnam War, which he didn't, Nixon actually asserting the opposite, according to the Los Angeles Times. Furthermore, after Nixon took office he openly implemented a plan that came to be known as Vietnamization, a shift in strategy that resulted in far fewer American lives lost in Vietnam and the return home of all our troops by the start of Nixon's second term.

In her attempt to worsen Nixon's reputation for duplicity, Maddow succeeds only in showing how willingly she resorts to deceit.