In the immortal words of the drill sergeant played by Warren Oates in "Stripes" -- lighten up, Francis.

Ex-Crossfire co-host and former California Democrat party poobah Bill Press sees it as so much worse -- nothing less than "treason" as far as he's concerned. Worth noting is that Press sets the bar fairly low for betraying one's country, at least when allegedly done by conservatives. Back in 2012 he lashed out at Republicans who signed the Grover Norquist tax pledge as "traitors." 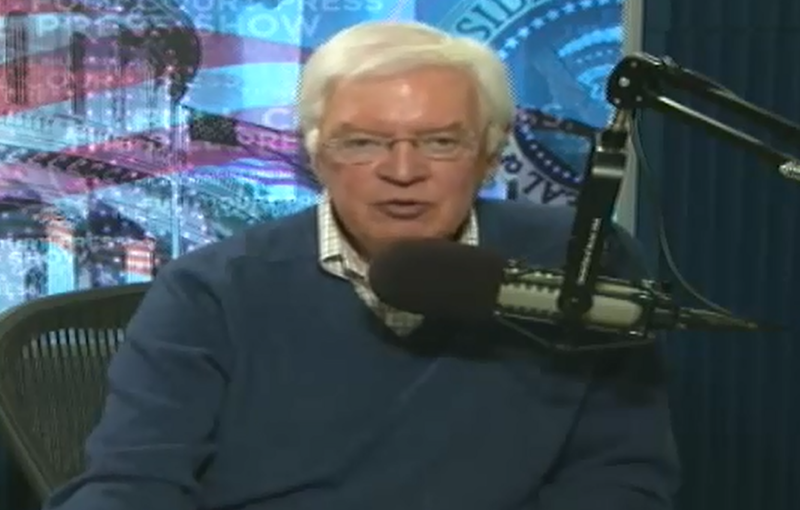 On his radio show March 5, Press leveled much the same accusation against Boehner (audio) --

But speaking of the Congress, again, I'm never going away again, I am never going away again. I mean, when I was gone, right, John Boehner caved in and Congress finally voted for, the House finally voted for a clean bill on DHS funding, which they should have done last year. ... All this tra-la-la, all this circus, all this drama, you know, since then, has just been wasted, waste of time. They got nothing else done while they did all this. So they finally did the right thing, President Obama signed it yesterday. And DHS now is, for the rest of the fiscal year, until September, gee, we should be grateful to this, right? The idea that we have to thank Congress for protecting us against terrorist threats for the rest of the year, but that's what it takes with this gang.

So, you know, that happens. I come back and yesterday the Supreme Court is hearing this challenge to Obamacare which could wipe out Obamacare if they go along with this crazy argument that four words in Obamacare should do away with all subsidies for 8.8 million Americans.

And then! Bibi Netanyahu, speaking to the joint session of Congress, which I still think was absolute nothing but political theater which should never, never have happened. And I think it's a disgrace that John Boehner issued that invitation, a disgrace that Netanyahu accepted it, turning the floor of the United States Congress, a joint session of Congress, into a political rally for somebody running for office in his own country and using that prestigious position to attack and undermine the president of the United States, for the United States Congress to allow that to happen is just, I think it is treason, I really do. And I gotta tell you, I salute the Democrats who in the Senate and in the House who just refused to even go to that speech, as well as I salute the Democrats who went to the speech and said afterwards what an insult it was and how condescending it was, starting with (House Minority) Leader Nancy Pelosi.

Press salutes Democrats regardless of what they do.

The nerve of Boehner and Netanyahu, staging "political theater" in Washington -- don't they know Obama staked an exclusive claim to that years ago?!

Actual reason that Press and other libs are so ticked off about Netanyahu addressing Congress -- the stunning contrast between the ex-commando and former community organizer. Truth Revolt's Bill Whittle nails it in a post aptly hailing Netanyahu as "the Leader of the Free World" --

THE LEADER OF FREE WORLD -- you know, the chickensh*t one -- rescues his people when they are held hostage -- PERSONALLY rescues them -- and stands arm in arm with world leaders against the endless, savage, Islamic murders of Jews and all civilized peoples.

THE PRESIDENT OF THE UNITED STATES goes golfing while hostages are being murdered -- PERSONALLY GOES GOLFING -- and will not so much say the words "Islamic Terrorists" or "Jews" as our time for chickensh*t posturing and preening runs out as fast as the nuclear centrifuges in Iran.

Still, Press's condemnation of Boehner pales when compared to potential consequences facing Obama's critics on Iran -- as apostate Democrat Bob Menendez is learning. In Russia, one of Putin's foes is gunned down within earshot of the Kremlin. In the US, an Obama opponent in the Senate faces recycled corruption charges. Not a plot line from House of Cards, really.