Actor Jack Black: I TiVo MSNBC, But That Joe Scarborough 'Dances With Wolves' 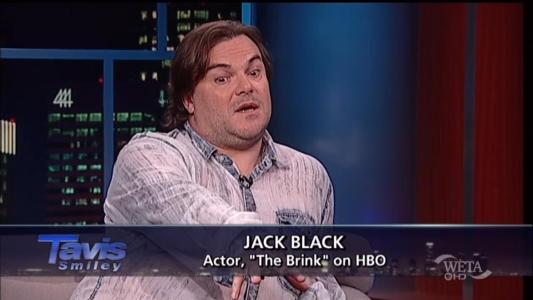 Liberal actor Jack Black is such a big fan of MSNBC he bragged to PBS’s Tavis Smiley “I’ve got like three or four of them queued up on my TiVo every night,” but he wasn’t sure about Joe Scarborough who he claimed “sometimes dances with wolves.”

The Kung Fu Panda and School of Rock star popped up on Friday night’s edition of Tavis Smiley to promote his new HBO show The Brink and revealed that he is “all about...the politics” and admitted “I get hot under the collar when...the people across the aisle start saying things that I think are uncalled for.”

Smiley then asked if his cable news choice revealed his political leanings to which Black retorted “Oh there’s no Republicans on MSNBC? What about that morning guy? That Morning Joe - he seems pretty, he could go either way.” When Smiley defended Joe Scarborough as “a smart guy” Black objected to the times when Scarborough actually sides with Republicans as he blurted: “Sometimes he dances with wolves though.”

The following exchange was aired on the April 24 edition of PBS’s Tavis Smiley:

TAVIS SMILEY: Let’s talk about this series The Brink.

JACK BLACK: So yeah I got this TV show on HBO. It’s my first series. I’d only done theaters and movies before. So it was a cool new experience. And I was attracted to the project because it was kind of edgy and funny, political. Lot of the things that I am interested in myself. Because you might not know this to look at me, but I’m all about like the politics, the TV shows on MSNBC. I’ve got like three or four of them queued up on my TiVo every night. I like to just check in and see what’s happening with the latest politics. And I get real like emotional about it.

SMILEY: You talking to the screen?

BLACK: I get hot under the collar when, you know, when the people across the aisle start saying things that I think are uncalled for.

BLACK: Oh there’s no Republicans on MSNBC? What about that morning guy? That Morning Joe - he seems pretty, he could go either way.

SMILEY: Joe is a smart guy though.

SMILEY: He’s a smart guy, smart guy. So you like the politics...

BLACK: Sometimes he dances with wolves though.

SMILEY: Yeah, he does.