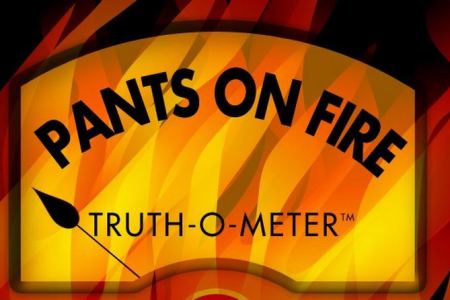 The political statement rating website PolitiFact, so far, has yet to label Brian Williams’ Iraq war tall-tale as “false” or even “mostly-false.” In fact a search of the site shows the most recent article on Williams, posted on their PunditFact page, is from Thursday and it’s merely a timeline of the still-unfolding crisis for the NBC Nightly News anchor.

A February 5 article by Lauren Carroll doesn’t even contain the words “lie” “falsehood” or “untrue.” While the article headlined “Timeline of Brian Williams’ statements on Iraqi helicopter attack” pointed out Williams “apologized” and offered video clips of Williams’ changing story over the years, they never stamped it with one of their trademark Truth-O-Meter ratings.

For example, in a Jon Greenberg PunditFact story from the same day, a Rush Limbaugh quote is stamped with a “pants on fire” graphic. In the article headlined “Rush Limbaugh blames measles outbreak on immigrant children,” Greenberg issued the following ruling: “There is no data that links this or any other outbreak of measles to those immigrants, who are vaccinated at about the same rate as Americans. This claim lacks any basis in fact. We rate it Pants on Fire.”

To this date, Politfact has yet to use the same kind of strong language in dissecting Williams’ Iraq war fabrications.