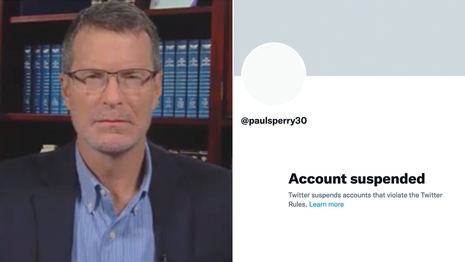 “This is outrageous censorship,” Sperry told MRC’s Free Speech America. “Yes, Twitter is a private entity, but it has become the [dominant] public town square for political information and debate and it also enjoys a monopoly as the site where government agencies and corporations first post their releases and statements to the press. Denying a veteran working journalist access to this platform restricts my ability to cover events and issue[s].”

Sperry said the suspension occurred after he shared a tweet criticizing the FBI’s raid on Trump’s home in Mar-A-Lago, Fla., which occurred Monday evening. “Funny, don’t remember the FBI raiding Chappaqua or Whitehaven to find the 33,000 potentially classified documents Hillary Clinton deleted. And she was just a former secretary of state, not a former president,” the tweet said, according to a screenshot Sperry shared with the MRC.

The journalist said he received notice from the platform early Tuesday afternoon saying his account was “permanently suspended.” When accounts are suspended, Twitter denies access to tweets and the Twitter feed, prohibiting users from interacting with followers. “No reason, no explanation,” he said, “other than perhaps posting factual content they didn’t like.”

Sperry went on to blast the Biden administration’s involvement in social media content moderation, saying this week’s censorship “amounts to state censorship by proxy,” he said.

Former White House Press Secretary Jen Psaki claimed in July 2021 that the Biden administration was “regularly making sure social media platforms are aware of the latest narratives dangerous to public health that we and many other Americans are seeing across all of social and traditional media.”

U.S. Surgeon General Dr. Vivek Murthy echoed Psaki’s sentiments in his own call to crack down on free speech online. He called so-called “misinformation” a “serious threat to public health,” and he encouraged Americans to “help slow the spread of health misinformation during the COVID-19 pandemic and beyond.”

When the government pressures Big Tech companies to censor, the censorship can be considered state action and a violation of the First Amendment, according to the CRS report, which also noted that those actions can communicate the “private party’s act is no longer considered an ‘independent decision.’”