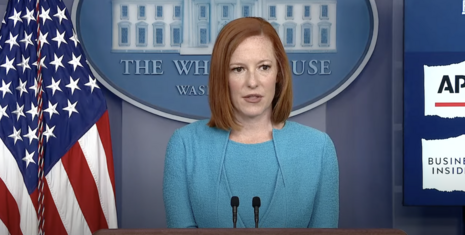 The Biden administration continued its rampage against what it deems to be "misinformation" about COVID-19. White House press secretary Jen Psaki announced that the administration is “flagging problematic posts for Facebook that spread disinformation” to blatantly use Big Tech to censor Americans.

This was the second day in a row where Psaki admitted the administration is either considering or taking action against free speech. Today surgeon general Dr. Vivek Murthy declared he was “urging all Americans to help slow the spread of health misinformation during the COVID-19 pandemic and beyond.” Murthy warned in a massive advisory that such “health misinformation is a serious threat to public health.”

Psaki followed that up with the fact that the Surgeon General’s Office is “flagging posts for Facebook that spread disinformation.” She said the administration has a four-point plan to restrict COVID-19 content it didn’t agree with.

She explained that, “there's also proposed changes that we have made to social media platforms, including Facebook, and those specifically are four key steps.” Those included publicly sharing the impact of “misinformation”; “a robust enforcement strategy”; “faster action against harmful posts”; and promoting “quality information sources.”

Media Research Center founder and president L. Brent Bozell III warned how dangerous the Biden plan really was: "Biden’s team is trying to collude with Facebook to censor the whole internet. If you’re not scared yet, you should be."

Yesterday Psaki warned the administration was about to take action against speech. But she was vague about what they planned to do. “Decisions to regulate or hold to account any platform would certainly be a policy decision, but in the interim, we’re going to continue to call out disinformation, and call out where that information travels,” said Psaki.

Big Tech has censored so-called COVID-19 misinformation at the behest of government before. Early in the pandemic, Facebook and its fact-checkers censored claims that COVID-19 was manufactured in a laboratory in Wuhan, China. The platform later reversed its position “[i]n light of ongoing investigations into the origin of COVID-19.”

YouTube reportedly deleted a COVID-19 roundtable from Florida Gov. Ron DeSantis (R), which featured testimony from several doctors. Twitter also removed a tweet from Dr. Martin Kulldorff that questioned the efficacy of masks. The platform also blocked Intellectual Dark Web member and podcast host Joe Rogan from sending a link which included a video about Ivermectin to one of his friends in a direct message.