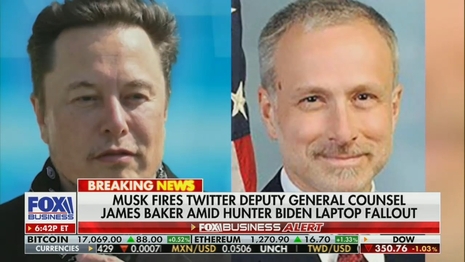 But he apparently failed.

“I don’t see how Jim Baker could have represented his client and met his ethical obligation as a member of any state’s bar,” MRC Free Speech America Vice President Dan Schneider said. “His state bar association should immediately investigate this matter to determine whether Baker’s license should be suspended or even revoked. Michael Avenatti is in prison today for taking advantage of his clients. Jim Baker should not be allowed to escape justice.”

“Over the weekend, while we both dealt with obstacles to new searches, it was @bariweiss who discovered that the person in charge of releasing the files was someone named Jim,” Taibbi tweeted. “When she called to ask ‘Jim’s’ last name, the answer came back: ‘Jim Baker.’”

Though news that Baker had been reviewing the “Twitter files” shocked everyone involved, “reporters resumed searches through Twitter files material – a lot of it – today,” Taibbi tweeted. The next installment of the Twitter files will appear on journalist Bari Weiss’s Twitter page, Taibbi wrote. “Stay tuned.”

Baker was FBI general counsel from 2014-2018. A controversial figure, he helped initiate the bureau’s investigation of former President Donald Trump’s supposed ties with Russia, helping to link his friend and Democratic operative Michael Sussmann with FBI investigators, according to The Washington Times. Other accusations included the propagation of claims that Trump had a secret communication channel with Alfa Bank, based in Russia, according to National Review.

Musk released through Taibbi on Friday damning documents exposing the extent of the platform’s efforts to squash the Hunter Biden laptop scandal first reported by the New York Post.

Conservatives are under attack. Contact your representatives and demand that Big Tech be held to account to mirror the First Amendment while providing transparency, clarity on so-called “hate speech” and equal footing for conservatives. If you have been censored, contact us using CensorTrack’s contact form, and help us hold Big Tech accountable.