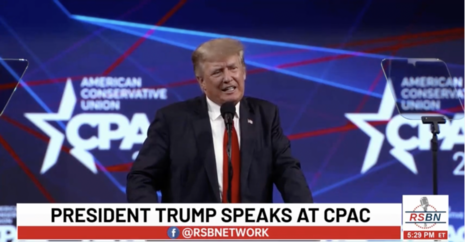 Trump bashed Big Tech censorship in a July 11 speech at CPAC in Dallas, Texas. The American Conservative Union (ACU) said YouTube censored its CPAC NOW channel before it could even air Trump’s speech.

Trump also slammed Big Tech for censoring speech online. “The radical left and Big Tech’s attack on free speech is unlawful. It’s unconstitutional, and it is completely un-American,” said Trump. “To protect the constitutional rights and liberties of every citizen, this week I filed a major class action [lawsuit].”

The ACU said that YouTube blocked Trump’s speech from airing well before he reached the stage. The platform allegedly issued a strike against the ACU’s channel after the organization posted a video that “featured coverage of former President Donald Trump’s major class-action lawsuit against Big Tech,” according to a statement from the ACU.

The ACU said that it was unable to air the final two days of the event, including Trump’s speech because of the strike against the channel. “It is clear that YouTube censored CPAC because we stood with former President Donald Trump on his lawsuit against Big Tech,” said ACU Chairman Matt Schlapp in the statement. “This is yet another example of Big Tech censoring content with which they disagree in order to promote the political positions they favor.” The platform also issued a strike to the channel, which will ban the ACU from posting “for one week,” according to the statement.

The ACU also stated that YouTube was unclear in describing the reason for its censorship. “YouTube cited ‘medical misinformation’ concerning COVID-19 as the reason for removing the America UnCanceled episode. YouTube did not specify any statements made in the video that allegedly violated their policies,” the statement continued.

The organization pledged to fight back against the censorship. It joined Trump’s lawsuits against Facebook, Google and Twitter, along with their respective top executives Mark Zuckerberg, Sundar Pichai and Jack Dorsey at a July 7 press conference. YouTube, along with at least nine other platforms, banned Trump after he called for “peace” following the Jan. 6 riot at the U.S. Capitol. He was kicked off of YouTube, Twitter, Facebook, Instagram, Twitch, Stripe, Snapchat, Reddit, TikTok and even Shopify. Facebook later announced that the former president would be suspended for at least two years.