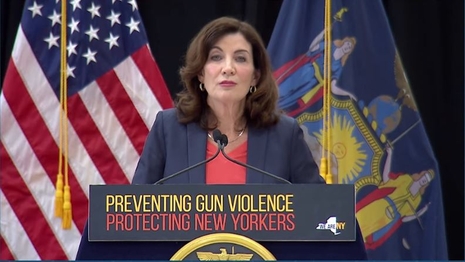 “In the State of New York, we’re now requiring social media networks to monitor and report hateful conduct on their platforms,” Hochul said during a press conference Monday. The new amendments require platforms to draft a so-called hate speech policy provide a way for users to report alleged hate speech and give users an explanation for how the platform is responding to the alleged hate speech after it’s reported.

The new law requires platforms to “provide and maintain a clear and easily accessible mechanism for individual users to report incidents of hateful conduct.”The “mechanism” must also “provide a direct response to any individual reporting hateful conduct informing them of how the matter is being handled.”

“[T]he use of a social media network to vilify, humiliate, or incite violence against a group or a class of persons on the basis of race, color, religion, ethnicity, national origin, disability, sex, sexual orientation, gender identity or gender expression.”

Like Biden’s Disinformation Governance Board, the social media law is an attempt to regulate online speech. The law claims that it should not be “construed” as a violation of First Amendment free-speech protections. However, neither the law’s text nor the governor explained how the measure will deter censorship and protect Americans’ free speech as defined in the Constitution.

Big Tech censors have consistently opposed mere opinions differing from the leftist narrative. Here are a few examples of Big Tech wielding the label of “hate speech” to silence people that foil the left’s narrative:

The New York law will take effect 180 days after its enactment.

Conservatives are under attack. Contact your state representatives and demand that Big Tech be held to account to mirror the First Amendment while providing transparency, clarity on “hate speech” and equal footing for conservatives. If you’ve been censored, contact us at the CensorTrack contact form, and help us hold Big Tech accountable.