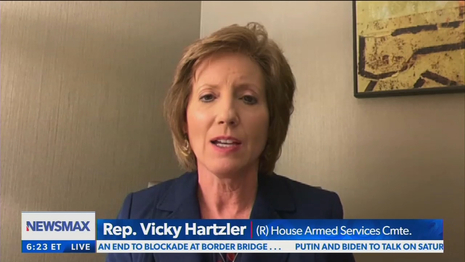 Hartzler tweeted: “Women’s Sports are for Women, not men pretending to be women,” according to a screenshot tweeted by her campaign manager Michael Haufner.

Hartzler is running for Senate and her campaign condemned the censorship in a statement calling it “shameful, utterly ridiculous, and a horrible abuse of censorship by big tech giants to stifle free speech."

The statement also challenged Twitter’s content moderation priorities: “Vladimir Putin is a murderous psychopath who invaded a sovereign nation causing death and destruction and is currently allowed to tweet,” read the statement. “Yet, Twitter believes the bigger threat is a senior member of the House Armed Services Committee saying women’s sports are for women.”

Twitter allowed similar comments from Hartzler before, however. A Feb. 14 tweet by Hartzler included the video ad and also repeated the language Twitter found offensive, ultimately leading to the platform to locking her account.

The Twitter spokesperson said Hartzler’s tweet “violated the Twitter Rules on hateful conduct”  and that she “will need to delete the violative Tweet and spend 12 hours in read-only mode before regaining full access to [her] account.” The spokesperson further explained that “[p]er that policy, we prohibit targeting others with repeated slurs, tropes or other content that intends to dehumanize, degrade or reinforce negative or harmful stereotypes about a protected category. This includes targeted misgendering or deadnaming of transgender individuals.”

Hartzler posted on Facebook responding to the possibility of losing her Twitter account. “Twitter says I can’t speak the truth on their platform- well, they can just have their account back!” she said. “I won’t delete my tweet, and I will keep speaking the truth! Women’s sports are for women, not men pretending to be women.”