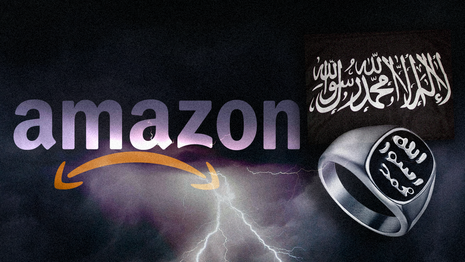 Amazon deplatformed the social media site Parler for violent content, but it has no problem providing violent, terrorist or Nazi content to its customers.

A flag from the terrorist group Hamas, a beanie that has the word “lynching” emblazoned across it, and a shirt with the slogan, “All My Heroes Killed Colonizers” are proudly sold on Amazon. In a previous study, the company was found selling a “Kill All Republicans'' T-shirt. A shirt with an image of Jesus Christ wearing the crown of thorns had the logo, “Kill Your Idols” across it. Several pieces of jewelry and articles of clothing promoting Nazi symbols are also sold on the platform.

Now that Parler has made its return after Amazon Web Services deplatformed it, it’s also worth noting Amazon’s hypocrisy. In a previous study, the Media Research Center counted 204 instances of violent merchandise sold on the platform. Thirty-seven of those items were eventually removed by Amazon, but 167 on that original list remain. Combined with the 103 on the new list, the Media Research Center has counted 270 hateful, violent products currently sold on Amazon.

A green flag with the Shahada, or Muslim phrase that is the basic statement of the Islamic faith, can be found on Amazon. The flag is carried by Hamas, an Islamic group designated as a terrorist organization by the United States State Department in 1997. In the item’s product description, the vendor writes, “FlagDistributor does not necessarily endorse any meanings or connotations you may assign to this or any other flag, ‘Meaning, like beauty, is in the eye of the beholder.’ We support the spirit of the 1st Amendment to the U.S Constitution; Censorship is UnAmerican and we don't practice it.” The URL of the product states “hamas.”

Additionally, a ring with a seal that bears a resemblance to the Al-Shabaab terrorist group from Somalia is sold as well. In 2008, the United States designated Al-Shabaab as a foreign terrorist group. Robert Spencer, the director of JihadWatch, informed the Media Research Center that “The round design on the ring is not the exclusive property or design of al-Shabaab. ISIS used the same design on its own flags.”

Finally, a black flag with the shahada emblazoned on it is also sold on Amazon. This flag appears to be the same style of flag that former Al-Qaeda leader Osama bin-Laden posed in front of during videos.

Amazon sells at least 100 items affiliated with white supremacy and Nazi ideology. Ninety-seven of those items include Nazi or white supremacist symbols and runes listed on the left-wing Anti-Defamation Legue’s “Hate Symbols Database.” Amazon recognizes that historical memorabilia has a place in this world, stating in its vending policies that the company “reserves the right to make a determination on the historical value of the item.” However, even among some of the stamps and coins with swastikas and other Nazi symbols, several modern pieces of jewlery, patches, flags and apparel with slogans such as “Team Aryan Lifetime Member” and other hateful dogwhistles like “#akia” (A Klansman I Am) remain on Amazon.

Some of the items sold on Amazon are upsetting to Catholics and Christians who may find the images offensive. One T-shirt had Jesus Christ on the front, along with the slogan, “Kill Your Idols.” 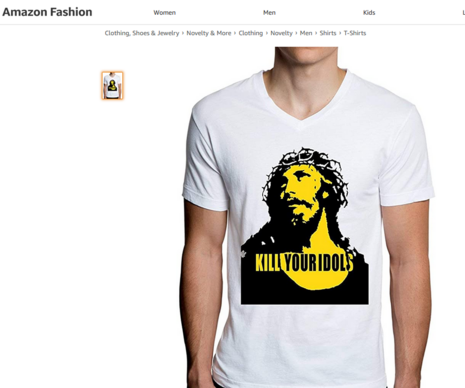 In 2019, the Council on American-Islamic Relations (CAIR) asked Amazon to take down bath mats that were imprinted with words from the Prophet Muhammed. Yet items that may be seen as blasphemous to Christians and Catholics are still up on the platform. Marduk, supposedly “the most blasphemous band in the world,” sells paraphernalia from their “Fuck Me Jesus” album, which includes a woven patch and a t-shirt with an image of a naked woman in a lewd position holding the crucifix. The site also sells a T-shirt with the same image on it.

A mug boasting a connection to high school shooter Dylan Klebold is also listed. In addition, a shirt that shows a cartoon-like version of the Columbine shooters, Eric Harris and Dylan Klebold, has been for sale since August, 2018, according to the product history. Another shirt with the same logo but for teen children is also for sale. On April 20, 1999, the two students opened fire on their school and killed 12 students and one teacher. A toxic online group known as “Columbiners” created fan fiction and merchandise surrounding the tragic event. 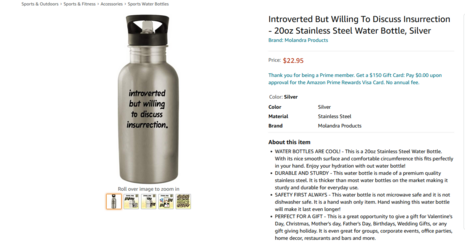 Still another gruesome shirt sported a “Yes we can” logo along with an image of a guillotine. The same vendor sells a shirt that says, “Punch Nazis Right In the Face.” Yet another shirt from the same place proudly announces “Robespierre was Right” in reference to Maximilien Robespierre, an influential figure in the French Revolution.

Previously, the Media Research Center found 204 violent pieces including swastikas, riot gear, including tasers, brass knuckles and stun sticks. Some of these violent products included a flag with a graphic image of Trump blowing his brains out, a mug with the slogan “Where is Lee Harvey Oswald now that we really need him?” and a black T-shirt with a red slogan, “Kill All Republicans.”