Twitter censored 668 tweets from former President Donald Trump before banning his account, claiming his tweets were inaccurate and that some were a “risk of violence.” But when Rep. Alexandria Ocasio-Cortez (D-NY) falsely accused a U.S. Senator of attempted murder, Twitter did nothing at all.

“I am happy to work with Republicans on this issue where there’s common ground, but you almost had me murdered 3 weeks ago so you can sit this one out. Happy to work w/ almost any other GOP that aren’t trying to get me killed,” tweeted Ocasio-Cortez to Senator Ted Cruz (R-TX) on Jan. 28, 2021. Her lie referenced the Capitol Riot on Jan. 6, where several people breached the Capitol building. This tweet received 462.7K likes and 85.6K retweets. 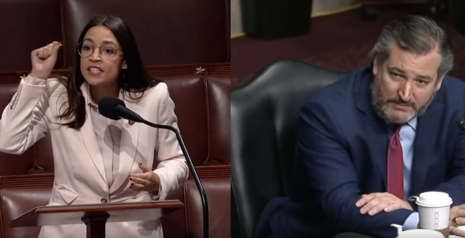 Twitter did not comment at the time of this publication. However, Ocasio-Cortez’s lie trended on Twitter. The trend was introduced with the sentence, “Alexandria Ocasio-Cortez tells Ted Cruz ‘you almost had me murdered three weeks ago so you can sit this one out’ after he Tweeted in agreement with her about the need to examine Robinhood’s trading restrictions.”

Three sources on the tweet in Birdwatch are “currently rated helpful.” One user wrote, “Ted Cruz did not attempt to murder Alexandria-Ocasio Cortez. This tweet is hyperbole and not a statement to fact.” Another wrote, “Ted Cruz did not, at any time, attempt to have anyone murdered.” The third one wrote, “Senator Cruz challenged the results of the election but did not attempt to have anyone murdered and did not support the Capitol riot.”

Other Birdwatch users wrote beneath those tweets sentiments that echoed Ocasio-Cortez’s original statement. One said, “The Capitol rioters saw Ted Cruz as their leader, commenting on video during the incident that Cruz would want them to do that. The goal of the zip tie guy was to use the zip ties on elected members of Congress, like AOC.”

Columnist and editorial director at the Heartland Institute Justin T. Haskins tweeted, “When did Ted Cruz try to kill @AOC? Do you see, @Twitter, how harmful and damaging this tweet by @AOC was????? She should be treated the same way @Twitter supposedly deals with everyone else who says ‘dangerous’ things.”

According to RollCall reporter Chris Cioffi, Cruz responded to Ocasio-Cortez: “You know, there's a lot of partisan anger and rage on the Democratic side. It's, it's not healthy for our country, it's certainly not conducive of healing or unity, but everyone has to decide how they want to interact with others.”

Seth Dillon, the founder of the conservative satire site The Babylon Bee, called out how Twitter handled the lie: “By the left's standard, she's inciting violence against him by making false allegations that anger and energize her followers.”

Conservatives are under attack. Contact Twitter at (888) 991-6240 and demand the platform suspend AOC. Big Tech must be held to account to mirror the First Amendment while providing transparency, clarity on “hate speech” and equal footing for conservatives. If you have been censored, contact us at the Media Research Center contact form, and help us hold Big Tech accountable.