After fact-checking President Donald Trump by using statements from CNN and The Washington Post, Twitter fired another salvo at Trump again over a tweet about the Minneapolis riots.

Trump tweeted, “These THUGS are dishonoring the memory of George Floyd, and I won’t let that happen. Just spoke to Governor Tim Walz and told him that the Military is with him all the way. Any difficulty and we will assume control but, when the looting starts, the shooting starts. Thank you!” 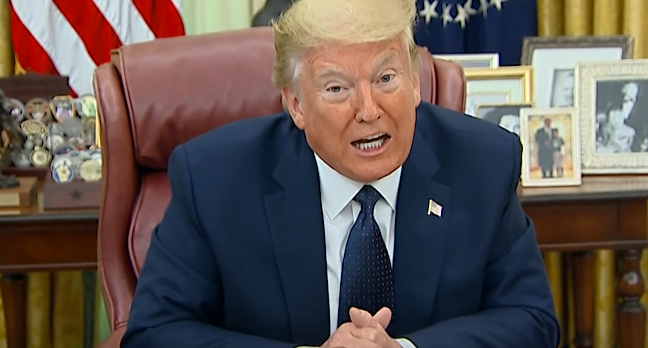 In addition, Twitter also prevented replies to the tweet. A pop-up message stated, “We try to prevent a Tweet like this that otherwise breaks the Twitter Rules from reaching more people, so we have disabled most of the ways to engage with it. If you want to talk about it, you can still Retweet with comment.” 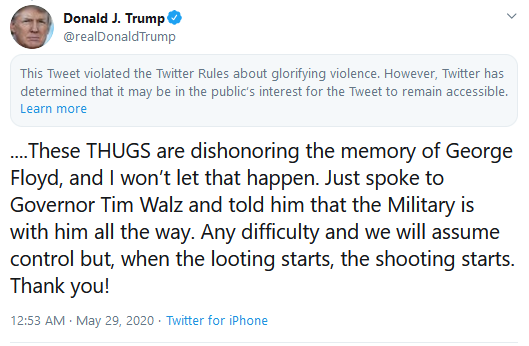 Twitter even went so far as to censor the same statement twice. The White House’s official Twitter account posted the exact same quote, only to receive the same treatment.

According to CNBC, Twitter CEO Jack Dorsey “was informed of the decision to label Trump’s tweet in advance.” But Dorsey’s personal Twitter feed showed him liking celebratory tweets about Trump’s censorship. A tweet from Nigerian lawyer Ayo Sogunro that stated, “PEOPLE, IT HAS HAPPENED! Twitter is speaking truth to power!!! Thank you @jack!” was liked by Dorsey. 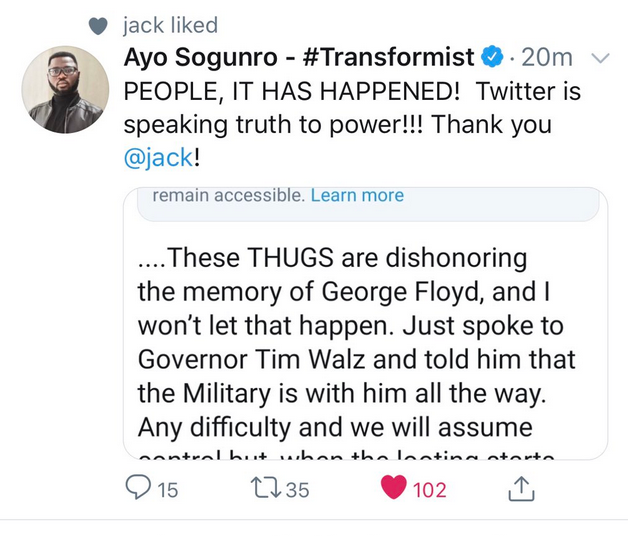 Twitter’s official account for Communications stated, “This Tweet violates our policies regarding the glorification of violence based on the historical context of the last line, its connection to violence, and the risk it could inspire similar actions today.”

Trump fired back and said, “Twitter is doing nothing about all of the lies & propaganda being put out by China or the Radical Left Democrat Party. They have targeted Republicans, Conservatives & the President of the United States. Section 230 should be revoked by Congress. Until then, it will be regulated!”

Commissioner of the Federal Communications Commission Brendan Carr tweeted, “Twitter has abandoned any attempt at a good faith application of its rules.”

Meanwhile, Supreme Leader of Iran Ali Khamenei tweeted that Israel, “The Zionist regime is a deadly cancerous growth and a detriment to this region.” He called for the country of Israel to be “uprooted and destroyed.” In response, Twitter has done nothing. 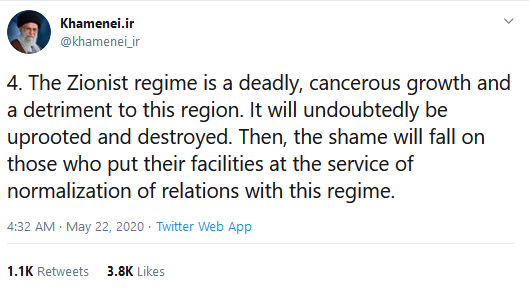