TikTok, the viral Chinese app that may live on your high school student’s phone, serves another devious purpose. It is a propaganda tool for the Chinese government.

Australian human rights activist and Uyghur Muslim Arslan Hidayat tweeted a video taken from TikTok which was allegedly posted to an official Chinese police account in the Zhangwan District, Shiyan City, Hubei Province. The video showed a man tied to a chair, while three Chinese police officers pointed at him. Hidayat claimed that the chair was a “torture device called a ‘Tiger Chair.’”

The BBC describes a “tiger chair” as a bench where “individuals’ legs are tightly bound to a bench, with bricks gradually added under the victim’s feet, forcing the legs backwards as well as long periods of sleep deprivation and the denial of sufficient food and water.”

Wired explained that “Thousands of videos from Xinjiang, filmed by both Uyghur and Han Chinese users, are uploaded every day to Chinese TikTok.” One video, detailed by Wired, was reportedly from the Xinjiang Yarkant County police department’s official account.

The video depicted “[a]rmed police officers” who “declare their loyalty to the Party.” The caption to the video was translated as having said, “Swear to the motherland to protect the people’s peace.” Another strange video, featured in Wired, showed a “psychological support session” for the Yarkant Police, also reportedly posted on their official TikTok channel. The video portrayed officers dancing before the Chinese flag and the Communist symbol. 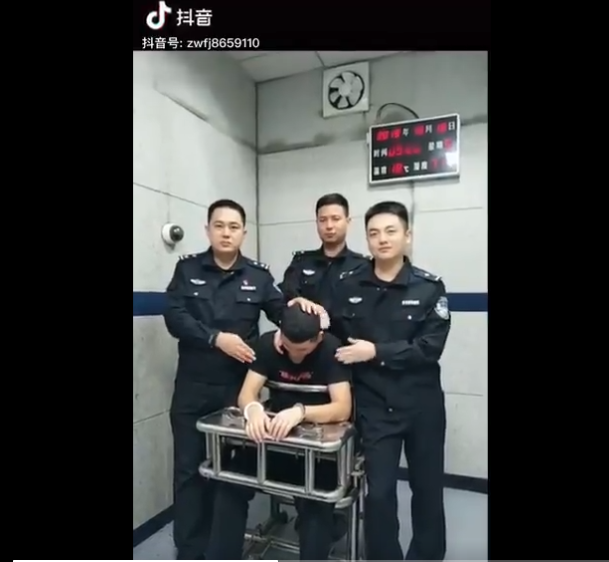 ByteDance, the owner of the TikTok app, has created a “politically convenient” reality through the video-sharing platform, according to The Washington Post. There is almost no hint of any sort of protest going on in Hong Kong, and the Post states that researchers worry that TikTok could be “one of China’s most effective weapons in the global information war, bringing Chinese-style censorship to mainstream U.S. audiences and shaping how they understand real-world events.”

The most disturbing part? This same app is widespread throughout the United States as an app for teens. The New York Times published a piece showing the popularity of TikTok throughout teenage America. “Students are forming TikTok clubs to dance, sing and perform skits for the app,” states The Times. The piece features teachers and educators who want to do more with TikTok in schools to grab students’ interests. “Many educators have set up their own accounts,” according to the article.

The app paid a $5.7 million fine to settle charges from the United States that it “illegally gathered children’s data,” alleged the South China Morning Post. The FTC stated that TikTok failed to obtain parental consent from the underage users before collecting data.

On an Instagram post, Senator Marco Rubio (R-FL) warned parents to “#DeleteTikTok.” He also said that TikTok was “censoring content that is not in line with the Chinese government and Communist party directives,” according to Mediaite. Rubio requested that the Committee on Foreign Investment in the United States investigate TikTok on the grounds of Chinese censorship.