The two female faces of the Democratic run for the presidential nomination can’t seem to agree about policy points.

On CNN’s Oct. 15 Democratic Party presidential primary debate, the discussion turned to Big Tech and what the candidates would do about it if they became president. Sen. Kamala Harris (D-CA) repeated her desire to ban President Donald Trump from Twitter, but also had another request: she wanted Sen. Elizabeth Warren (D-MA) to echo her demand. “Join me in saying that his Twitter account should be shut down,” she told Warren. 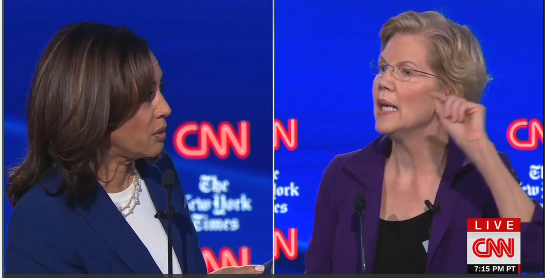 Harris was initially asked about the theoretical spread of disinformation in the event that tech platforms were broken up. While she did not believe in that theory, Harris changed the subject: “Senator Warren,” she said, “I just want to say that I was surprised to hear that you did not agree with me that on this subject of what should be the rules around corporate responsibility for these big tech companies, when I called on Twitter to suspend Donald Trump’s account, that you did not agree ...”

She continued, accusing Trump of using Twitter to “openly intimidate witnesses, to threaten witnesses, to obstruct justice.” Harris also blamed the El Paso shooting on Trump as well, saying “Twitter should be held accountable and shut down that site. It is a matter of safety and corporate accountability.” Harris echoed the complaints she had made on CNN previously, when she first called for Trump’s Twitter “privilege” to be “taken from him.”

Warren answered, “So, look, I don’t just want to push Donald Trump off Twitter. I want to push him out of the White House. That’s our job.” Then, as Harris tried to get her to agree to her demand that Twitter ban Trump, Warren refused, with a simple “No.”

Harris pressed again, saying, “What I am saying is that it seems to me that you would be able to join me in saying the rule has to apply to Twitter the same way it does to Facebook.” Warren responded that she had no problem saying “all of the rules should apply across the board.” But she did not agree to join Harris in calling for Trump to be banned from Twitter.

Notably, other candidates weighed in on Big Tech and the antitrust problem. Venture for America founder Andrew Yang argued that “competition doesn’t solve all the problems.” He said that the “20th century antitrust framework” would not work for solving the Big Tech problem. “[I]t’s not like breaking up these big tech companies will revive main street businesses around the country,” Yang said.

Former Texas Democratic Party candidate for Senate Beto O’Rourke wanted Facebook and other platforms to be treated like publishers, not open social media sites. If these sites were treated as publishers, then the Trump ad about former Vice President Joe Biden would not have been run. He said, “We would allow no publisher to do what Facebook is doing, to publish that ad that Senator Warren has rightfully called out, that CNN has refused to air because it is untrue and tells lies about the Vice President.”

Recode, the tech arm of Vox, wrote that this “was the first time tech was discussed meaningfully on the Democratic debate stage — and a sign that the media sees the growing techlash as enough of a concern that candidates should be pressed on it on national television.”