Facebook Censors Santa Kneeling in Front of Jesus as ‘Violent’

Censorship on Facebook has reached a level of absurdity. Even seemingly innocuous Christmas images are considered too graphic for sensitive users.

A post with over 11,000 shares dating back to 2015 was given a blackout covering, with the words over it, “This photo may show violent or graphic content.” But instead of a gory image or a disturbing picture underneath it, there was a painting of Santa Claus kneeling at the manger, worshipping the infant Jesus. When the photo was uncovered, the caption read, “This photo was automatically covered so you can decide if you want to see it.” 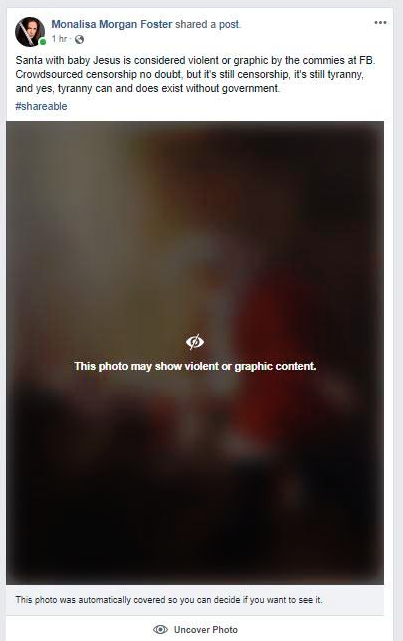 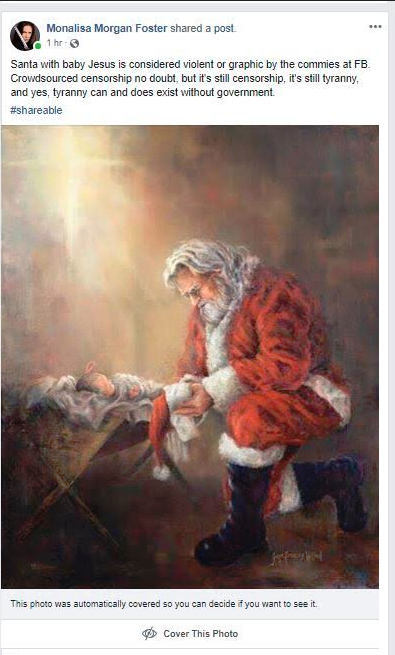 Two Facebook users posted the painting within the last 4 hours, and both times the image was covered up.

None of these instances are in the painting of Santa kneeling in front of the infant Jesus. The caption mentions “scarred hands,” referring to the wounded hands of Christ, and “nails.” If these mentions of what is a key part of Christianity are too violent or graphic for Facebook, then the platform might be discriminating against Christianity.

In the past 24 hours alone, Facebook has censored pro-life articles from LifeNews, and have been accused once again by conservative organization PragerU for “shadowbanning” videos featuring Ben Shapiro, Candace Owens, and Lila Rose. In the meantime, the social media company is scrambling to apologize to liberals and to billionaire George Soros, in the aftermath of a New York Times piece that slammed the site for funding opposition research on Soros. Color of Change is conducting a civil rights audit on Facebook.

It seems that Facebook is eager to join the liberal war on Christmas. Is a picture of Santa Claus too graphically religious for the most sensitive of users?