Twitter says it wants to improve the “health” of their “conversation” on its site, but its going after the wrong people.

On Friday, July 27, conservative commentator Kathleen McKinley discovered her Twitter account had been suspended. She was told she had “violated our rules against ‘hateful conduct.’” The two tweets that had been reported as “hateful” were tweets about transgenderism being a mental disorder, and a tweet that had been taken out of context that spoke of Muslim “honor killings.” 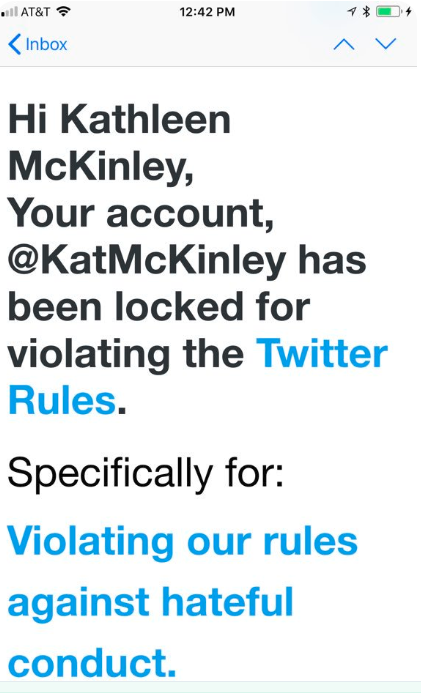 She was not originally notified of the suspension, nor was she able to appeal to Twitter to get the suspension lifted. In an interview with the Media Research Center, McKinley said, “I’ve always been very civil. In my blogs, I wouldn’t allow anyone in the comments to curse or disrespect anyone. The idea that I would say anything hateful is ridiculous.”

The tweets cited were as follows: “One more thing. Limiting the Transgender Troops, which I feel was normalizing a mental disorder (gender dysphoria) (called “distress” now) which has no place in our military. Certainly not our $$ for surgery.”

The other tweet, taken out of context from a conversation with Big Bang Theory producer Bill Prady, was, “Please do not pretend you know nothing about extreme Muslim beliefs that condone honor killings!”

In an article McKinley published on The Federalist, she wrote that Prady “acknowledged and said his tweets had indeed “led to the perception I wasn’t condemning honor killings.” He then condemned honor killings, and apologized. But even without the context of the Twitter thread, honor killings among extremist Muslims are a simple fact. How is that hate speech?”

She also defended her other tweet, saying “Stating, in a civil manner, why I disagree with transgender troops is in no way a threat or harassment.” In her Facebook post, McKinley also pointed out that medical studies refer to gender dysphoria as a mental disorder. 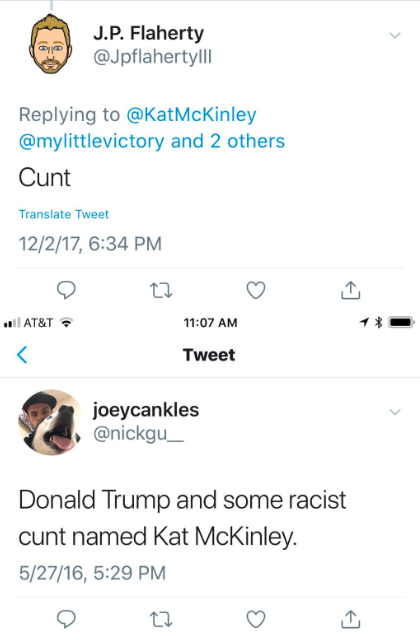 Yet, even though Twitter was quick to punish her for stating her views, they seem to have ignored all the threatening, harassing tweets McKinley has received from hostile Twitter users. One of the tweets told her “go fuck herself” while another tweet called her a “racist cunt.” Neither of these tweets have been removed or taken down.