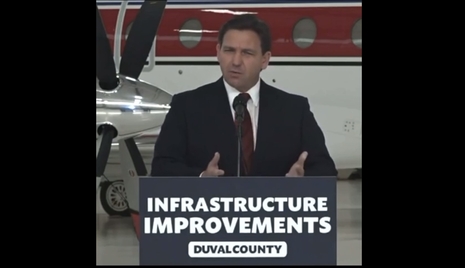 “[Apple] is providing aid and comfort to the CCP.” Gov. Ron DeSantis (R-FL) slammed Apple for kowtowing to the Chinese communist government while simultaneously trying to squash free speech in America by potentially banning Twitter from the App Store.

The riots against tyrannical Chinese Communist Party (CCP) COVID-19 lockdowns and other authoritarian policies have captured the attention of the world. One of the groups protesting harsh working conditions en masse in China are employees of Apple iPhone manufacturer Foxconn, according to PJ Media.

But, as DeSantis said, Apple is apparently on the side of the CCP, not the workers, because the tech giant is acting like a CCP “vassal” and preventing protestors from using the airdrop function on their phones.

“There’s reports that Apple is not allowing the protestors to use this airdrop function where they’re trying to communicate,” DeSantis stated. “That, obviously, is providing aid and comfort to the CCP, and so you see that report and that’s very concerning.”

But Apple’s crackdown on free speech isn’t limited to China.

DeSantis explained that “Apple is threatening to remove Twitter from the App Store because Elon Musk is actually opening it up for free speech and is restoring a lot of accounts that were unfairly and illegitimately suspended for putting out accurate information about COVID[-19].”

Experts were wrong about many things when it came to COVID-19, DeSantis emphasized. “And Twitter, the old regime in Twitter, their response was to try to just suffocate the dissent,” the governor stated. But Twitter’s new owner Musk “knows that’s not a winning formula, and so he’s providing free speech.” If Apple were really to ban Twitter from the App Store for allowing more free speech, that would be a “huge mistake,” a “raw exercise of monopolistic power that I think would merit a response from the United States Congress,” DeSantis added.

DeSantis concluded that he was “glad things are changing at Twitter,” because, even though there is still a lot of work to be done to control Big Tech’s censorship frenzy, “this is big progress.” The governor didn’t pull any punches with Apple. “Don’t be a vassal of the CCP on the one hand, and then use your corporate power in the United States on the other to suffocate Americans and try to suppress their right to express themselves.”

This is not the first time Apple has succumbed to Chinese pressure. In 2019, Apple removed the app HKmap.live from its app store after the CCP complained about the app’s use by freedom protestors.