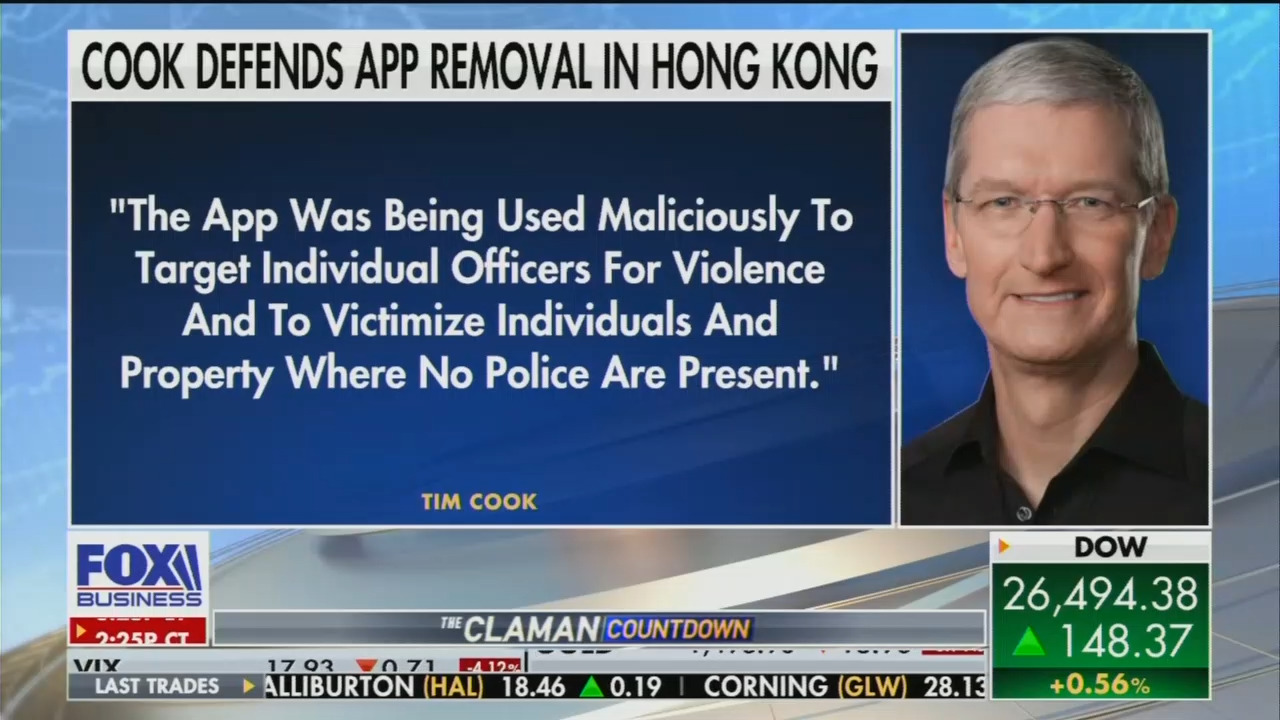 Apple has no problem being woke, except when it might cost the company billions of dollars.

On the People’s Daily Facebook page, the newspaper wrote, “The app, which is free to download, allows rioters to run wild and avoid law enforcement. The app for rioters has helped them conduct violence and makes one wonder what the motive of Apple is by offering such an app.”

The app was initially taken down in the first week of October, but was restored after Apple reportedly determined that removal was a “mistake.”

A source who lived in Hong Kong told the Associated Press that the app helped her avoid the police when she went outside. Canny Ng said that “most of the Hong Kong people, maybe they’re really afraid of the police nowadays.”

The People’s Daily wrote, “Let business be business and let politics be politics.” Apple sold $9 billion worth of merchandise in China in the last quarter alone, reported Forbes. It is expected to pull in “almost $43 billion” from China alone in the year 2019. China Daily, another state-run newspaper, was quoted in Forbes as saying, “Apple has to think about the consequences of its unwise and reckless decision. … They also need to know that only the prosperity of China and China’s Hong Kong will bring them a broader and more sustainable market.”

Keefe tweeted that the reason for Quartz’s removal from the Chinese app store might be because of “[o]ur excellent @qz coverage of ongoing Hong Kong protests.”

“We have learned that an app, HKmap.live, has been used in ways that endanger law enforcement and residents in Hong Kong. Many concerned customers in Hong Kong have contacted us about this app and we immediately began investigating it. The app displays police locations and we have verified with the Hong Kong Cybersecurity and Technology Crime Bureau that the app has been used to target and ambush police, threaten public safety, and criminals have used it to victimize residents in areas where they know there is no law enforcement. This app violates our guidelines and local laws, and we have removed it from the App Store.”

Yet Apple and its CEO Tim Cook have no problem fighting for justice when it comes to LGBTQ issues. Cook told an audience that social division “has no home here” and that “[i]t moves us to speak up for the LGBTQ community, for those whose differences can make them a target for violence and scorn.”

Senator Josh Hawley (R-MO) criticized the move. “Apple assured me last week that their initial decision to ban this app was a mistake. Looks like the Chinese censors have had a word with them since. Who is really running Apple? Tim Cook or Beijing?”