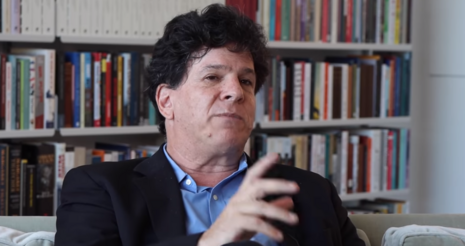 “Intellectual Dark Web” leader, podcaster, and top investor Eric Weinstein slammed the Biden administration for pressuring Spotify to remove renowned podcast host Joe Rogan from the platform, tweeting, “This is an open war on American Values from the Oval Office.”

Eric Weinstein hosts The Portal podcast about “science, culture and business,” and is a managing director at Thiel Capital. Weinstein is also a member of the countercultural “Intellectual Dark Web” (IDW). After White House Press Secretary Jen Psaki called on streaming platform Spotify to clamp down on speech to stop so-called “misinformation” on its platform, Weinstein quickly responded. “This is not about @spotify or @joerogan anymore. Or COVID. Or vaccines,” Weinstein tweeted. “This is about the President of the United States USING vaccines to lean on communications/news companies to label his critics as misinformation.”

Weinstein then insisted that, as a supporter of free speech, he intends to stop taking censorship lying down. “So @PressSec [Psaki] we’re going to come straight after *your* #EliteDisinformation,” Weinstein declared. He said, “I surmise that @NSF, @BLS_gov, @HHSGov, @NIH, @NIAIDNews, @doddtra, Fauci, [Francis] Collins, etc, are all located under the Whitehouse in the Executive branch. Thus, dis- or mis-information from them, is yours.”

Weinstein metaphorically turned the tables on censorship advocates. He suggested the following for a “warning label” on the White House lectern: “‘Warning: The Oval Office & its departments/agencies are leading repeat purveyors of misinformation & disinformation on everything from Gain-of-Function research to Weapons-of-Mass-Destruction to Immigration/Trade/Inflation policy.’?” Weinstein emphasized the freedom at the core of America: “This discussion has NOTHING to do with vaccines or public health. It’s about American Citizens’ freedom to dissent from their own Executive Branch.” He ended, “Whether it is or isn’t still meaningfully America, It’s time to find out. Let’s do this.”

Many “theories” aggressively dubbed “misinformation” earlier in the pandemic, such as the laboratory leak theory of COVID-19 origins, have now been shown to be plausible or true, even among leftists. Furthermore, expert studies are now contradicting continuing narratives from government officials. National Institute of Allergy and Infectious Diseases director Dr. Anthony Fauci has continued to endorse lockdown restrictions as a method of combating COVID-19. A new meta-analysis from Johns Hopkins University concluded that COVID-19 lockdowns saved very few lives while inflicting “enormous economic and social costs.”

The New York Times called the IDW–a term coined by Weinstein–“a collection of iconoclastic thinkers, academic renegades and media personalities who are having a rolling conversation — on podcasts, YouTube and Twitter, and in sold-out auditoriums — that sound unlike anything else happening, at least publicly, in the culture right now.” Psychologist Jordan Peterson and The Daily Wire Founding Editor-in-Chief Ben Shapiro are other prominent figures in IDW, and Rogan has interviewed many IDW figures, The Times said.

Conservatives are under attack. Contact your representatives and demand they hold Big Tech to account to provide transparency on hate speech and equal footing for conservatives. If you have been censored, contact us using CensorTrack’s contact form, and help us hold Big Tech accountable.