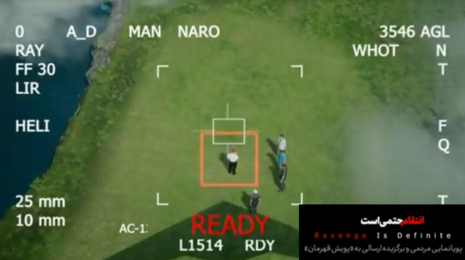 The New York Post reported that the suspension occurred after @KhameneiSite promoted an animated video depicting the assassination of Trump and Pompeo. The video, called “Revenge Is Definite,” shows a drone strike against Trump and Pompeo in “revenge” for the Trump administration’s successful strike against Iranian terrorist leader Gen. Qassem Soleimani.

The animated video takes place at “Trump’s House” in Florida, and appears to show Pompeo receiving a text seconds before the “strike” occurs, saying, “Soleimani’s murderer and the one who gave the order will pay the price.” The video remains up on the Ayatollah Khamenei’s official website, Khamenei.IR. The site describes the video, “The winning animation from the people in the ‘Hero’ contest conducted by Khamenei.ir on the topic of revenge on Trump, Pompeo and the murderers of Gen. #Soleimani.”

Twitter has also often allowed extremist groups or governments to encourage violent rhetoric without retribution, such as Chinese and Iranian officials and media outlets. This reported suspension of @KhameneiSite seems to be a fairly unusual application of Twitter’s rules against such extremists. While the reported account @KhameneiSite can no longer be found on Twitter, the Ayatollah’s own Twitter account, @khamenei_ir, remains.

The Ayatollah’s account has tweeted questionable content too. He tweeted the following on Jan. 5, 2022, and the tweet remains up on Twitter without censorship as of the publication of this piece: “Martyr Soleimani is an eternal reality that will live on forever. His assassins - including Trump & the likes - will disappear in history’s garbage bin, but of course after receiving retribution in this world for the crime they committed, God willing.”

Another Iranian official tweeted recently, “The Islamic Republic of Iran considers vengeance against those responsible for the Baghdad crime to be the right of all believers; whether they are drops in the ocean or bits of sand in the desert they'll seek vengeance next to the criminals' homes.” The tweet includes an apparent image of Trump golfing and overshadowed by an aircraft, and has not been censored by Twitter as of the publication of this piece.

Conservatives are under attack. Contact Twitter at (415) 222-9670 and demand that Big Tech be held to account to mirror the First Amendment while providing clarity on hate speech and equal footing for conservatives. If you have been censored, contact us at the Media Research Center contact form, and help us hold Big Tech accountable.