“As it turns out, remembering the politically inconvenient is a risky thing. To help others to remember is even more dangerous.” Leftist WIRED published these words as part of a report on Chinese online censorship. The irony is that WIRED condemned China for the same censorship practices that social media platforms engage in here in America. 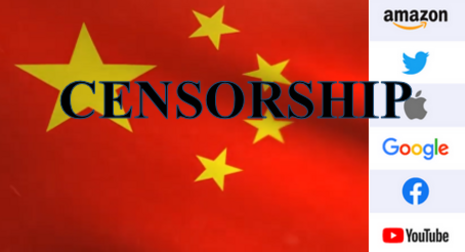 WIRED characterized the CCP censorship as undermining community; or rather, specific unapproved communities. What the left-leaning outlet did not add was that social media companies in America also engage in seemingly targeted, biased censorship of independent voices and certain communities — in particular, those who disagree with the liberal or leftist narrative on a given topic.

Indeed, anyone saying “politically inconvenient” (to use WIRED’s phrase) things in the U.S. can be censored.

The Media Research Center found in October that Big Tech censored congressional Republicans by a rate of 54-to-1 compared to congressional Democrats. Big Tech suppressed evidence linking Joe Biden to corrupt financial dealings with China through his son Hunter, and a MRC survey found that 13.1 percent of Biden voters would have changed their vote had they known the story. Big Tech censorship of politically inconvenient stories is so blatant that a poll commissioned by MRC with McLaughlin & Associates from October found that 51.8 percent of voters believe Big Tech is guilty of 2020 “election interference.” Former President Donald Trump was banned from Twitter, but Chinese and Iranian government officials and entities continue to spread violent, threatening rhetoric on Twitter.

MRC Free Speech America’s CensorTrack database currently has logged 3,068 censorship cases. The CCP is certainly guilty of silencing voices accusing a member of the power structure, but so are American social media companies. And if WIRED was right to indicate that Chinese censorship is meant to isolate independent voices and undermine community, then Big Tech is doing the same in the U.S.