‘Terrifying’ for the US: YouTube Censors Steven Crowder for So-Called Trans ‘Hate Speech’

“This is terrifying for the United States of America,” said comedian Steven Crowder after he was censored by YouTube for a Louder with Crowder episode highlighting recent reports of “transgender” rape threat to women. YouTube issued the strike just after Crowder finished a different episode on the reported “transgender” rape cover-up in Loudoun County, Virginia schools. 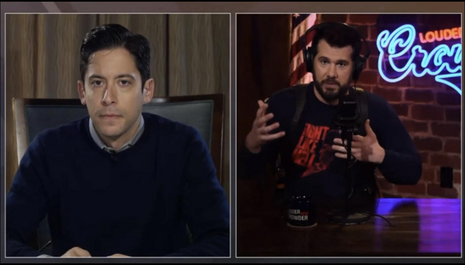 Crowder posted on Instagram late last week that YouTube had removed an episode of his Louder with Crowder show and temporarily suspended his channel. The censored episode included a comedy sketch based on reports of the increasing sexual threat transgenders pose to female inmates in California’s prisons.

Crowder shared alleged screenshots in which YouTube claimed that the episode violated the video platform’s so-called “hate speech policy” against the “LGBTQ+ community,” including “by indicating that trans people pose a rape threat to women.” The strike was issued as Crowder finished a different episode on the reported Loudoun County school rape scandal. Crowder later told Daily Wire host Michael Knowles, “They are coming for you, even if your children are being raped.”

Crowder protested on Instagram, “I do not believe that all transgenders are rapists, and I would never ‘indicate’ such.” Crowder said he covered specific, documented rape cases and highlighted the concern of Loudoun County parents.

The Daily Wire’s investigative report stated that a ninth-grade girl was allegedly sexually assaulted by “a boy allegedly wearing a skirt” at a Loudoun County school in May. The superintendent reportedly denied that any assault relative to the policy was on record.

“The school board chastised the [girl’s] father, and the rapist went on to sexually assault ANOTHER young female student,” Crowder said.

Crowder appeared on Knowles's eponymous eponymous show to discuss the YouTube censorship. During the episode with Knowles, Crowder emphasized how careful he was to provide sources for everything on his show. “So when people say go and build your own YouTube, go and build your own Twitter or Facebook, it’s not possible, because these entities are one and the same with government right now,” Crowder said. Knowles agreed, “The public square in our society today is online.”

YouTube spokesperson Ivy Choi told MRC Free Speech America that Crowder’s content was removed for “repeated targeting of the LGBTQ+ community.” Choi said that YouTube penalizes a creator who “repeatedly targets, insults and abuses a protected group based on attributes such as sexual orientation or gender identity and expression.”

Media Research Center founder and President Brent Bozell also emphasized during a recent MRC roundtable how vast Big Tech’s influence is. An MRC survey revealed that tech and media censorship of the Hunter Biden scandal skewed the 2020 election from a Trump win to a Biden victory.