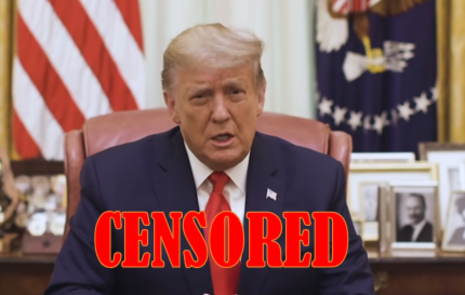 Exclusive: Google, the next Ministry of Truth, is rewriting history. Google’s “About” section is meant to explain at a glance the most relevant facts about a person. Unless it’s former President Donald Trump. His “About” section contains no mention that he was ever president.

Former President Donald Trump blasted the new form of Google censorship in an exclusive quote to MRC Free Speech America: “It’s a disgrace to our Country. I got them by surprise in 2016 and they said we’ll never let it happen again. They should be punished.” A Trump aide added that the president would include this latest information in his lawsuit against Big Tech.

Google has updated or changed its biographies for several presidents as MRC Free Speech America was writing this story. Prior to Oct. 13, the only six presidents who did not have both a biography and a “presidential term” listing were all non-Democrats, five Republicans and one Whig, Zachary Taylor. Those “About” section write-ups appear on the right-hand side of a results page for desktop users and down the page for mobile users.

Democratic Party president Franklin D. Roosevelt does not have a biography as of this time. A biography was added to George W. Bush’s “About” and a biography was removed from George H.W. Bush’s “About.” Trump is called “45th U.S. President” under his name on the left of the Google search results page, but not in his “About” section. Lincoln is likewise listed as “16th U.S. President” on the left of his page. Mike Pence, Trump’s vice president, does have a biography mentioning his former office and a “previous offices” listing. One thing has stayed consistent on Google throughout: Donald Trump never had either a biography or a “presidential term” listing. 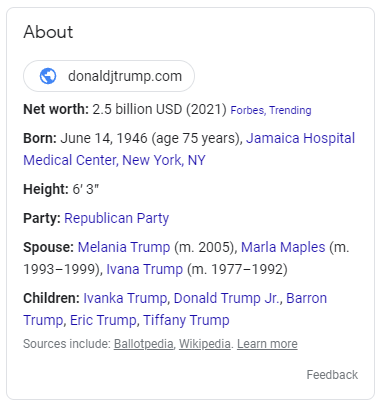 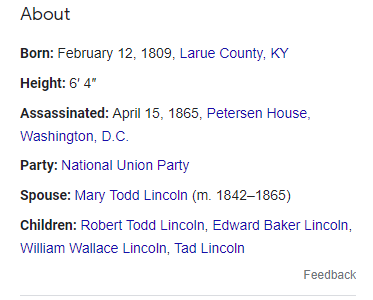 It’s not just American presidents. Various extremist or dictatorial world leaders have biographies or other identifications of their leadership status. Chinese Communist Party head Xi Jinping has both a “presidential term” listing and offices in his biography. Extremist dictator Ayatollah Khamenei, “supreme ruler” of Iran, has a biography listing his offices. Ismail Haniyeh, a leader of terrorist organization Hamas, has a totally non-critical biography.

Russian President Vladimir Putin does not have a biography; but, unlike Trump and Lincoln, Putin’s “About” section does have entries for “office,” “previous offices,” and “presidential terms.” Are Trump and Lincoln considered worse than Putin by Google?

Strangely, even Confederate Jefferson Davis has a biography identifying him as “the president of the Confederate States.”

None of this is new. Google has a history of censorship. It blacklisted conservative sites, including MRC NewsBusters, from organic search results in July 2020. Google whistleblower Zach Vorhies said in August that Google had altered its news algorithm specifically to target Trump. Google banned pro-life ads from Live Action in September. Google’s “About” section is also drawn from other sources, including the notoriously biased Wikipedia.

Conservatives are under attack. Contact Google at (650) 253-000, or by mail at 1600 Amphitheatre Parkway Mountain View, CA 94043, and demand that the platform be held to account to provide transparency and equal footing for conservatives. If you have been censored, contact us at the Media Research Center contact form, and help us hold Big Tech accountable.