Former President Donald Trump condemned the Biden administration’s Disinformation Governance Board in an interview with CBN News. Trump soundly scorched the new government board for its parallels with Soviet Russia.

Trump, as a battle-scarred veteran of the war on free speech, warned that President Joe Biden’s new Disinformation Governance Board (DBG) may doom America. “I think that uh— It’s not even believable that we’re talking about this subject, if you want to know the truth,” Trump told CBN News in an interview published on Wednesday. “Who would have believed that we’re talking about somebody who’s gonna censor people over a period of—over a long period of time—and very strong?”

Trump even mocked the powers that be for their creeping totalitarianism. “Now they’re saying, ‘Oh, no, it’s just a recommendation,’ quipped Trump. “That’s where it all began. I guess that’s what they used to say in Russia. That’s what they said in the Soviet Union, right? ‘We’re just going to do a little bit’ — uh, no, we can’t do that. We can’t do that. That’s a horrible thing.”

On the other hand, Trump quipped that he has his own “Ministry of Truth” in that the actual “Truth” can be found on “Truth Social,” Trump’s new social media app.

The Hill reported that “legislation in both the House and Senate was introduced by Republicans that would seek to block the board amid allegations that it would ‘silence dissent’ and curb free speech.” Sen. Marsha Blackburn (R-TN) is co-sponsoring the Senate bill. Rep. Lauren Boebert (R-CO), who is reportedly “sponsoring a similar bill in the House,” condemned the DGB. “The Mayorkas DHS is supposed to house the Ministry of Truth, yet, Mayorkas can’t even answer if the Steele Dossier would be considered misinformation,” she tweeted May 1. 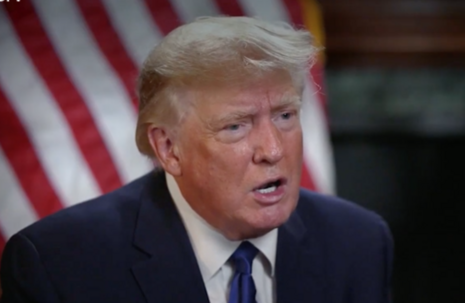 In a press release on her congressional website, she warned:

The Department of Homeland Security should not be in the business of censoring free speech on Twitter and Facebook. Following in the steps of Mao and Stalin, Biden’s unconstitutional, dystopian “Department of Propaganda” is trampling on the First Amendment and trying to control what people can and can’t say.

In the press release, Rep. Paul Gosar (R-AZ) skewered the left in a statement for corrupting institutions to the point where they can purge anything that contradicts the left’s ideology: “[T]he real truth will be labeled a lie or be deemed subversive.  We saw this with two years of COVID lies.  We saw this with the Hunter Biden laptop lies. We saw this with the Russia collusion hoax.” He then hammered his point home: “We used to live in a free society where differing opinions were allowed. This latest effort is to stop all dissent.”