During an interview on the Tuesday edition of Fox News PrimeTime, Hillbilly Elegy author and Ohio U.S. Senate candidate J.D. Vance (R) accused Google of “conspiring” with China, raking Google over the coals:

You know, Google right now is actively conspiring with and working with the Chinese government. They’ve actually been very open about this fact. At the same time, the 29-year-old woke idiots who work at Google refuse to allow Google to enter into contracts with the U.S. Department of Defense.” Vance chastised conservatives for failing to realize that Google “is not a national company anymore. It's not actually invested in the nation that allowed it to become so wealthy and so powerful. Why do we keep on giving it special privileges? 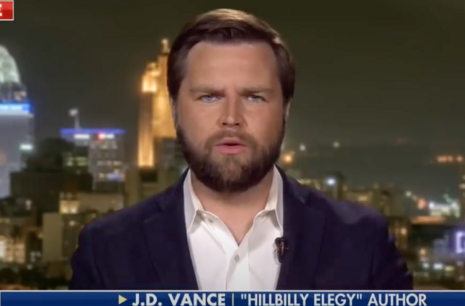 Serving as this week's host, Mark Steyn expressed concern for the power and unpredictability of Big Tech: "[Big Tech companies] are already bigger than most nations on Earth." He continued: "And the few nations they’re not bigger than, such as China, they are entering into a malign alliance with. And yet, the right spends its time having these sort of college dorm room abstract discussions about the issue."

He launched into Big Tech as the perfect example demonstrating the problem. He noted that Big Tech “effectively control[s] the flow of information in our society” and how “you cannot speak your mind as a conservative without fear of being censored by Facebook, Twitter, Apple, whoever else.” The problem, Vance observed, is that “if you try to do something,” then what “people always say is: ‘Well, these are private companies, we can't do anything about them.’” Vance scorched that hands-off mindset for being too complacent and too misinformed:

Google announced in 2018 that it was dropping out of the $10 billion contract bidding for the Pentagon initiative known as JEDI. Google opted not to renew its contract with Project Maven in June earlier that year, a government project related to drones. However, Google forged ahead with the controversial Project Dragonfly at the time, a censored search engine made in cooperation with the communist Chinese government.

Conservatives are under attack. Contact Google at (650) 253-000 and demand the platform provide equal treatment to Americans and organizations regardless of left or right ideology. If you have been censored, contact us at the Media Research Center contact form, and help us hold Big Tech accountable.