First liberal corporations attacked conservative speech, but now they are destabilizing the finances of those they disagree with, as former Senate candidate Lauren Witzke has reportedly discovered.

American bank Wells Fargo has reportedly shut down the bank account of Lauren Witzke, a 2020 Delaware Senate GOP candidate and outspoken activist. An account purporting to represent Witzke claimed via Telegram that her bank account had been shut down, leaving her penniless in Florida: “Wells Fargo has shut down my bank account, taking all of my money and leaving me with a zero balance.” The Witzke account torched Wells Fargo for leaving her in the lurch and causing her to rely on the charity of her friends:

“When I called Wells Fargo told me that it was a ‘business decision’ and that they have the right to close my account at any time. Had I not been surrounded by friends in Florida, I would be completely stranded. Use this as a warning and get your money out of Wells Fargo if you are a conservative. This is so evil.” 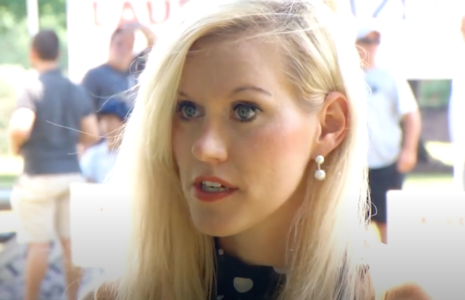 “Wells Fargo does not consider political views or affiliations in making account decisions.  An account may be closed for a number of reasons based on individual facts and circumstances. While we cannot discuss customer accounts because they involve confidential customer information, we can report that we have reviewed this situation, gave ample notice of our decision and it was handled appropriately.”

Conservative firebrand Michelle Malkin wrote in a commentary on CNSNews that Witzke’s “entire life savings of roughly $15,500 had been transferred to ‘loss prevention.’” Malkin further asserted that “[Witske] would be barred from retrieving her funds at any branch office and that they would ‘mail a check.’”

Malkin reportedly heard from Witzke directly, the former candidate stating, "The current weaponization of corporations and banks against conservatives and Christians is terrifying.” Witzke reportedly recounted how sudden her ousting was from Wells Fargo:

"I have banked with Wells Fargo for years, using it as savings when I was working in ministry. Only when I was given a platform to share my Christian views on the national stage did Wells Fargo decide to shut down my account. The Evil Oligarchs at Wells Fargo left me, a young woman, with a balance of zero dollars, stranded, and a thousand miles away from my home with no explanation...Christians and Conservatives, get your money out of Wells Fargo, NOW!"