Twitter is infamous for censoring conservatives. It even censored then-President Donald Trump after he called for “peace” during the Jan. 6 Capitol riot. But this week, Sen. Rand Paul reportedly said the platform “allows C-list celebrities to encourage violence against me and my family.”

Musician Richard Marx tweeted May 23 what appeared to be glorification of violence: "I’ll say it again: If I ever meet Rand Paul’s neighbor I’m going to hug him and buy him as many drinks as he can consume.” The post appeared to be in reference to an incident where Sen. Rand Paul (R-KY) was assaulted following a dispute with his neighbor. "The neighbor of Sen. Rand Paul who in 2017 attacked the Kentucky Republican during a dispute about their yards was sentenced Monday to an additional eight months in prison for the assault," NBC News reported. 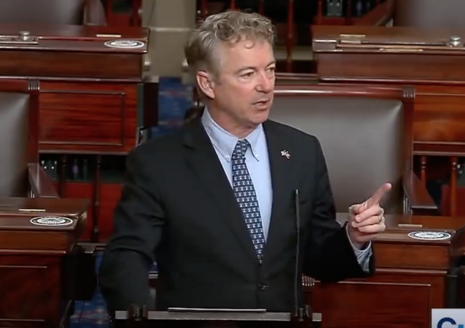 Paul reportedly received a suspicious package that was filled with white powder and contained violent imagery. “I take these threats immensely seriously," the senator reportedly proclaimed in a statement to Politico. “As a repeated target of violence, it is reprehensible that Twitter allows C-list celebrities to encourage violence against me and my family. Just this weekend Richard Marx called for violence against me and now we receive this powder filled letter.”

Twitter’s policy forbids "Glorification of violence": "[W]e have a policy against content that glorifies acts of violence in a way that may inspire others to replicate those violent acts and cause real offline harm, or events where members of a protected group were the primary targets or victims." The same policy page explained further: "We define glorification to include praising, celebrating, or condoning statements, such as ‘I’m glad this happened.’" The policy also denoted that violations “include, but are not limited to, glorifying, praising, condoning, or celebrating: “violent acts committed by civilians that resulted in death or serious physical injury,” among other things.

The package’s reported contents are a serious matter.

“On the outside of the envelope was a picture of a bruised and bandaged Paul with a gun to his head and a threat printed beneath it: ‘I’ll finish what your neighbor started you motherf------,’" Fox News reported, claiming it had viewed a copy.

“The incident has become the latest rallying cry for conservatives who claim that social media platforms overtly target right-wing users,” The Washington Post reported. “It comes as Paul has faced blowback this week for saying that he will refuse the coronavirus vaccine, citing the antibodies he says he has from contracting covid-19 last year.”

Twitter has not yet answered MRC inquiry as to what action the platform will take against Marx’s account, if any.