Leaders from Eastern Europe, the Anglosphere, and now the European Union have warned Big Tech that it overstepped its bounds by censoring then-President Donald Trump and his supporters. Macron expressed outrage over Big Tech companies choosing to “suddenly cut the mic” and silence “all the platforms where it was possible for [former-President Donald Trump] and his supporters to express themselves,” AP News reported Feb. 4. Macron torched Big Tech as he spoke at the Atlantic Council forum for cynically deciding to censor Trump “[a]t the very second when they were sure” that Trump would lose the presidency.

AP News later quoted Macron’s disgust at Big Tech’s unchecked stranglehold over online speech: “I don’t want to live in a democracy where the key decisions and the decision to at the point of them cut your mic ... is decided by a private player, a private social network.” Macron explained his reasoning: “I want it to be decided by a law voted by your representative or by a regulation, a governance, democratically discussed and approved by democratic leaders.” 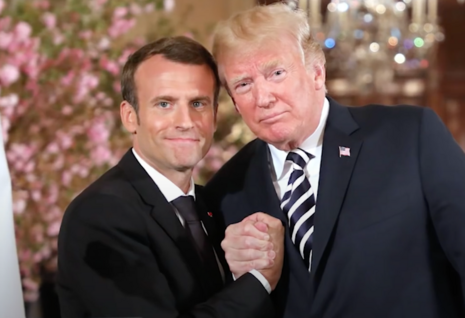 Macron also raked Big Tech companies over the coals for enabling violent political groups in both France and the U.S. Axios reported.  Macron observed: "The new violence in our democracies, largely linked to these social networks” is now “our new way of life," according to Axios. Macron explained how Big Tech has ultimately helped radicalize the greater international political conversation, The Washington Examiner quoted his statement:

“My deep conviction is that social networks are definitely part of the roots of this change. ... They legitimated, in a certain way, the lack of inhibition in the different speech. They promoted the culture of tough words, of conflict and so on.”

Countries in multiple continents have been similarly outraged over the censorship of Trump, his supporters and conservatives in general.

In the weeks following Trump’s censorship on Twitter, Hungary joined Poland as one of the premier European powers taking on Big Tech. Hungarian Minister of Justice Varga Judit announced in a January 26 Facebook post: “After consulting with the heads of the involved state institutions, the Ministry of Justice will propose a law to the Parliament this spring about the regulation of the great tech companies’ Hungarian [operation].” Varga warned would-be censors that Hungarians will not tolerate technological tyranny from Big Tech: “The deliberate, ideological or business-motivated digital damaging can no longer happen without consequences in Hungary!”

Australian Deputy Prime Minister Michael McCormack accused Big Tech of “censorship” following the U.S. Capitol riot. “There’s been a lot of people who have said and done a lot of things on Twitter previously that haven’t received that sort of condemnation or indeed censorship. But I’m not one who believes in that sort of censorship,” McCormack said.

Mexican President Andrés Manuel López Obrador declared earlier in January plans to make an international anti-censorship coalition were already underway. “I can tell you that at the first G20 meeting we have, I am going to make a proposal on this issue,” he declared. Obrador slammed Big Tech for behaving “as a sort of Spanish Inquisition on what is expressed.” Mexican Foreign Relations Secretary Marcelo Ebrard also commented: “Given that Mexico, through our president, has spoken out, we immediately made contact with others who think the same.” Mexico had reportedly “heard from officials in France, Germany, the European Union, Africa, Latin America and Southeast Asia," reported AP News.