Former President Donald Trump gave a final speech where he warned against censorship from Big Tech and reassured his supporters that his movement is "only just beginning."

After a presidency spent battling Big Tech censorship against him and his supporters, Trump warned in his Jan. 19 farewell address that Americans must keep up the good fight. “Now, as I leave the White House, I have been reflecting on the dangers that threaten the priceless inheritance we all share,” Trump declared. Trump illustrated specifically that at the “center” of America’s “heritage is also a robust belief in free expression, free speech and open debate.”

Trump specified further that America could only “allow political censorship and blacklisting to take place in America” if the people themselves “forget who we are, and how we got here.” Trump continued to articulate his concern with Big Tech’s attempt to curtail one of America’s first freedoms: “Shutting down free and open debate violates our core values and most enduring traditions.” 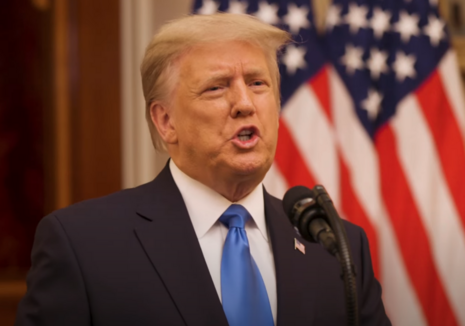 Trump elaborated that rejecting political censorship on principle is part of America’s tradition of free thought:

“In America, we don't insist on absolute conformity or enforce rigid orthodoxies and punitive speech codes. We just don't do that. America is not a timid nation of tame souls who need to be sheltered and protected from those with whom we disagree. That's not who we are. It will never be who we are.”

Trump’s urgent warning that free speech must be protected at all costs is especially salient after he was censored by Big Tech companies. Multiple Big Tech platforms even cracked down on Trump’s call for peace amid political unrest in D.C., which saw rioters storm the U.S. Capitol building. The crackdown on a sitting president and his supporters was so severe that even foreign world leaders ranging from Mexico to members of the European Union condemned Big Tech in the following days.

“Given that Mexico, through our president, has spoken out, we immediately made contact with others who think the same,” Foreign Relations Secretary Marcelo Ebrard commented. AP News illustrated that Mexico’s government had reportedly “heard from officials in France, Germany, the European Union, Africa, Latin America and Southeast Asia."