Twitter’s rules against “misinformation” don’t apply to everyone. The platform didn’t stop a full-blown anti-American propaganda video from being released by the Chinese government. And this isn’t the first time Twitter allowed Chinese propaganda.

The Chinese Embassy in France uploaded an absurd, lego-based propaganda video at 10:54 a.m. Apr 30. The Ambassade de Chine en France’s video “Once Upon a Virus…” featured numerous demonstrably untrue myths, acting as if the Chinese communist government and World Health Organization (“WHO”) have both been forthcoming about the nature of the COVID-19 pandemic. 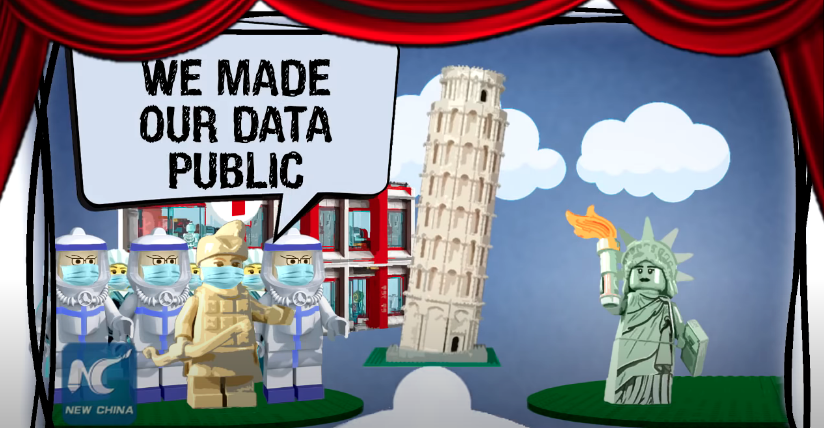 Below are a few of the exchanges presented in the Chinese propaganda video:

Lego Statue of Liberty figurine: “That’s right. You lied. We did nothing for three months, and because the W.H.O. agrees with China, we’re cutting the funding for the W.H.O.”

Chinese Lego figurine: “Are you listening to yourselves?”

Lego Statue of Liberty figurine: “We are always correct, even though we contradict ourselves.”

Chinese Lego figurine: “That’s what I love best about you Americans, your consistency!”

Twitter Safety announced its intent to tackle all COVID-19 misinformation earlier this spring:

Yet this misinformation video from the Chinese embassy is a clear attempt to undermine trust in the American government while it tries to navigate a national crisis.

The absurd pro-Chinese government propaganda video, which gives a false chronology of what happened from month to month, did not address WHO misinformation that cited the Chinese regime’s comments concerning the coronavirus and how it is spread.

Twitter has allowed China to scapegoat the American military as the source of the virus when Spokesperson & Deputy Director General, Information Department, Foreign Ministry of China Lijian Zhao posted articles suggesting the Wuhan virus originated in the United States. Zhao also speculated in a tweet: “It might be US army who brought the epidemic to Wuhan.”

The hapless WHO also tweeted disinformation from the Chinese regime that may have worsened the spread of the virus as late as Jan. 14, 2020:

The video delivered another dangerous myth when it claimed that in March China’s numbers were “dropping.”

China’s regime has a history of state-sanctioned mass murder and has concealed human rights abuses, including allegations to the UN that it has been reportedly harvesting organs from various ethnic minorities. Thus, China downplaying its COVID-19 outbreak so it could blame other countries is not out of character.

“Chinese state media is flooding Facebook and Instagram with undisclosed political adverts whitewashing its role in the coronavirus pandemic and pinning blame on Donald Trump,” The Telegraph reported in early April. This misinformation siege is reportedly being carried out by “Xinhua, China Central Television and the Global Times,” which have released stories in multiple languages.

The same video put out by New China TV has also been allowed to remain on YouTube.