‘We’re Fighters at PragerU,’ They Declare After Bias Court Hearing

One conservative media outlet’s battle over free speech can shake up the country’s future.

On Tuesday August 27, PragerU held a press conference after their hearing at the Ninth Circuit Court of Appeals during the saga of their lawsuit against Google/Youtube.

Prager is a popular conservative media outlet known for its academic but easy to understand videos which explain conservative ideas.

PragerU had gathered a crowd of students, supporters, and staff, many of whom were holding signs condemning tech censorship with messages such as “Stop Big Tech Censorship” and “YouTube Can't Silence Us.”

PragerU’s Chief Marketing Officer Craig Strazzeri was one of a handful of speakers who spoke. He pointed across the street to the library as an immediate example of a place where PragerU would be restricted. “If a student walks into that public library, goes on the computer, and searches for PragerU videos,” he said “there are over 200 that they will not be able to see” later adding for emphasis that five of those videos are on the Ten Commandments. 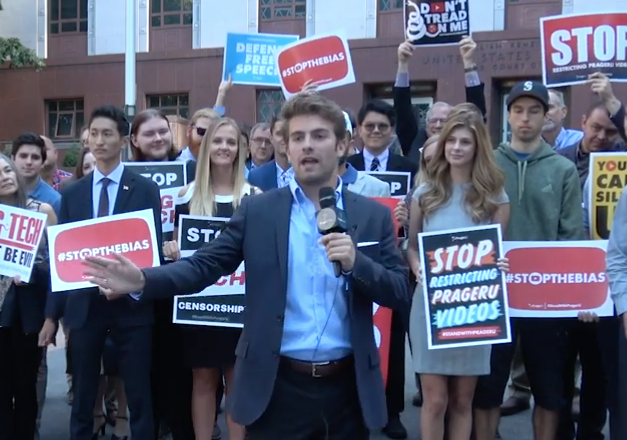 “It’s obvious that YouTube does not like PragerU because we’re effective. Were reaching millions of people every day with conservative idea, and they’re trying to stop that momentum, but thats why were gonna keep fighting. We’re fighters at PragerU.”

PragerU personality Will Witt declared the importance of remaining on YouTube. “We don't wanna just start our own platform, right? Because we’re trying to reach everyone. There’d be so many leftists, people like me when I was in college, who we’d never reach.”

He also hammered home the point that PragerU videos changed his life and helped reshape him as a conservative thinker. “Without seeing those videos, I’d never be where I am today.” He added that, without those videos, “I’d never be fighting for the values I believe in and the values that make America the greatest country on Earth.”

Former California Governor Pete Wilson expressed his optimism about the future of this case: “I am very proud of my colleagues and I think they did a terrific job this morning, and I think the prediction that Peter Obstler made, that you will see us again, that we will be back, that I think was a very clear and well spoken prophecy.”

PragerU’s attorney Peter Obstler commented that he feels strongly about this case, “to suggest that PragerU’s content is obscene, violent, hate speech… is an absolute insult!” He added: “We will be back, but I am optimistic that we got a fair hearing.”

“Keep the faith, we’re moving forward, and we’re never giving up” he said to a quick response of cheers from the crowd.

According to PragerU’s outreach to the MRC, over 200 of its videos are restricted on YouTube. During the trial, the lawyer representing it specifically addressed how absurd it was that PragerU’s tame videos are listed as “restricted” in the same manner as videos which contain violence or explicit content.

PragerU also has claimed that YouTube has demonetized much of their content, meaning they can no longer generate income from ad revenue.

Their videos, which are well known for their calm and measured tone, have been reportedly labeled by YouTube as “derogatory” and even “dangerous.”

A few examples of this content YouTube considers worthy of restriction include content such as “The Ten Commandments: What You Should Know,” “Does Free Speech Offend You?”,  “Black Fathers Matter,” “Israel’s Legal Founding,” “What You Need To Know About Planned Parenthood,” and “Cops Are the Good Guys.”

PragerU has claimed as an organization that while Youtube claims that only a fraction of its users (1.5%) use restricted mode. However this 1.5% of Youtube users translates to a whopping 27 million fewer users who have the chance to view their content.

Restricting these videos can mean that their target audience may be unable to watch for themselves. YouTube’s restricted mode is used in locations such as libraries, schools, and public institutions.