Instagram has gone to war with meme pages. The reason why is unclear.

“Instagram seems to have purged most of the top meme accounts on the platform,” according to Insider.  Reports indicate that pages with hundreds of thousands to millions of followers were suddenly purged on July 25 and 26.

YouTuber and free speech advocate Tim Pool theorized in his video “The Great Meme PURGE Is Upon Us, Instagram BANNED 30+ Accounts” that this may be a calculated move ahead of the 2020 election. 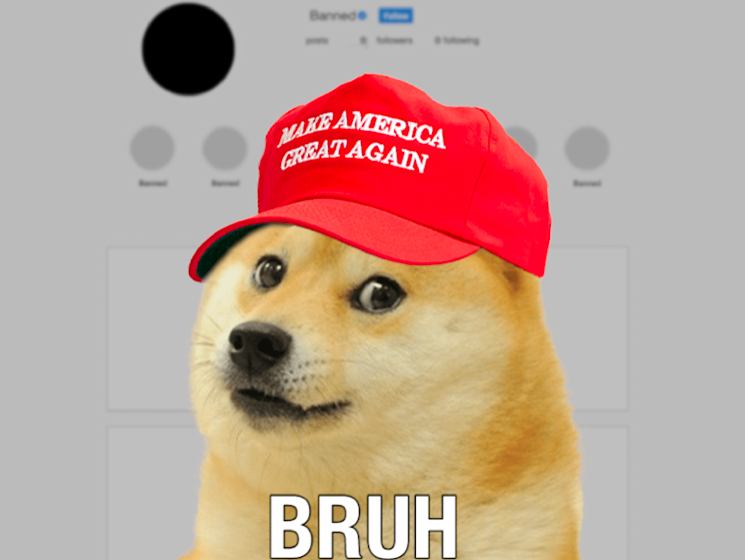 He commented that Trump was not supposed to win the 2016 election, but the unexpected power of meme pages, dominated by anti-establishment conservative creators, undermined mainstream media. “Facebook’s actually banned some of the highest profile Trump supporters” he observed. “Action is being taken to get rid of things that were beneficial to Trump. These meme accounts, we’re talking about 30+ million followers across all these accounts, wiped out in the past couple days.”

According to the unnamed meme-maker who ran the "@spicy.mp4" and "@memeextraordinaire" Instagram pages, the accounts reached tens of millions of followers. Insider also noted that “users who ran the accounts have already lost out on hundreds of thousands of dollars in combined income.”

One 18-year old-meme page manager named Caige told Insider that he did not violate any of Instagram’s terms of service, but rather "they are just finding an excuse to eliminate the meme pages."

His tweet responding to his ban by Instagram read ”@instagram you just deleted all of my accounts for absolutely no reason, no warning, and no context behind this. (30 million+ followers worth of accounts deleted in 24 hours).”

It is unclear if this latest action was politically based. However, there have been numerous purges of anti-establishment conservatives and humorists under the pretext of combating “misinformation” by supposedly non biased fact checkers.

Pro-Trump cartoonist Ben Garrison, whose work was well wildly popular during the 2016 election, announced he was banned from Instagram April 16. The company claimed he was guilty of “violating their terms.” He quipped that the real translation of his alert from Instagram was: “You're a threat to the Democrat narrative.”

Instagram and its parent company Facebook also had a mass deplatforming of “far-right extremists” in early May. This included entirely non-violent commentators such as Paul Joseph Watson and Laura Loomer.

As Poynter Institute reported on May 6,

“Starting this week, Instagram is sending potentially false posts to the same dashboard that Facebook’s fact-checking partners use to sift through misinformation. That way, fact-checkers will have the chance to select, debunk and thereby limit the spread of Instagram-specific hoaxes without changing their workflows.”

Instagram spokeswoman Stephanie Otway told Poynter, “Our approach to misinformation is the same as Facebook’s — when we find misinfo, rather than remove it, we’ll reduce its distribution.”

Otway explained that Instagram will remove “false” posts from the “Explore” section where photos are recommended to users based upon their instagram browsing history, much like YouTube. That way, as Poynter summarized “it’s harder for users to find bogus images and memes unless they already follow an account that’s posting them.”

According to Otway, that system has apparently been in the works since the 2018 midterm election in the U.S.

Poynter observed that “For a social media app rife with bogus photos, conspiracy theories and straight-up disinformation — which some say is harder to quantify than on Facebook — that’s big.”

Free speech advocates concerned about how one person’s idea of a “conspiracy” may be another person’s truth, and wary of who checks the fact checkers may find such content moderation highly disturbing.