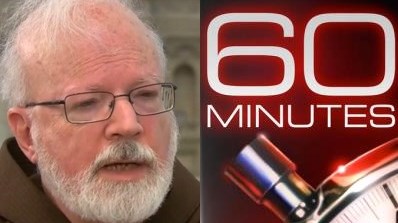 It was only a couple years ago that CBS's 60 Minutes fêted Ireland's Archbishop Diarmuid Martin as he took the Church to task over decades-old abuse claims in Ireland. Indeed, 60 Minutes has a long and storied record of outright hostility against the Catholic Church.

So we were surprised that Archbishop of Boston's Cardinal Seán O'Malley agreed to appear on 60 Minutes and assist them in once again rehashing the sex abuse story and hammer the Church.

While the media has showered O'Malley with praise for his management of sex abuse cases, we have actually been troubled with the way he has handled cases in Boston by paying sizable sums to settle questionable claims.

In the spring of 2012, O'Malley's archdiocese paid out large settlements related to accusations of abuse against two priests. However, as we carefully chronicled at the time, there is substantial reason to believe that the payments were not justified.

Both accused priests were long ago dead, neither man had even a hint of impropriety when they were alive, and these were the only claims ever made against them. The archdiocese's payoffs understandably infuriated the friends and families of both tarnished priests.

We also wonder if O'Malley's willingness to go along with 60 Minutes' attacks on the Church caused it to ignore O'Malley's questionable record of financial stewardship in the Archdiocese of Boston.

As the Boston Herald has repeatedly reported, and as local watchdog Boston Catholic Insider (BCI) has often chronicled, under O'Malley's leadership, salaries for lay leadership in the Archdiocese of Boston have ballooned to such astronomical levels that many believe they are outright scandalous.

-- Archdiocesan "Secretary for Media and Public Affairs," Terrence Donilon, took home total compensation of over $208,000. (It is unclear to us what this man actually does for such a hefty pay.); and

-- The archdiocese's "Secretary for Institutional Advancement" (whatever that means), Kathleen Driscoll, grossed a sweet $298,327.

Most notably, between 2006 and 2011, O'Malley cut 50 jobs from the archdiocesan staff but still somehow managed to increase the payroll by $1 million.

Oh, yeah. One other thing: As of 2013, the archdiocese was saddled with an astronomical $137 million in debt, all while recently increasing its Management and Overhead expenses by 71% but still reducing pastoral spending by 27%, according to BCI.

So the lesson here is that if a Church official is willing to criticize the Church over the topic of sex abuse, the media will fête him as a media darling no matter what he has actually done as a Church official.