All heretics must be reprimanded, and the prelates at The Root are shouting “anathema!” at NYC Mayor Eric Adams because he didn’t mention race enough in his press conference on crime on June 6. 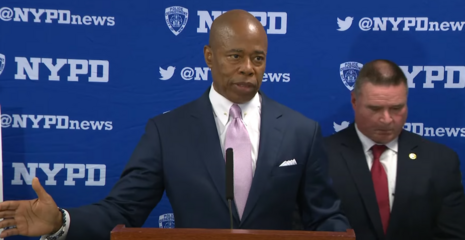 New York City has an out of hand crime problem, like most liberal cities. Adams was in a press conference attempting to address the issue of the legal system in New York, praising police officers for “being ‘laser-focused on the shooters’” while targeting judges and prosecutors. Candace McDuffie of The Root sought to keep Adams in line with the revolution, saying “Instead of viewing lawmakers as the ones solely culpable, Adams should be re-evaluating our system as a whole.” Nothing less than full overthrow is acceptable rhetoric for woke progressives.

The Root’s inquisition into the conference revealed that Adams didn’t mention race one bit. McDuffie said, “Adams made no reference to how the NYPD has become notorious for racial profiling, nor did he address the racism that fuels police brutality. Instead, the former NYPD captain focused solely on criminals, whom he referred to as ‘bad guys.’”

Well, yeah, because wasn’t talking about racial profiling for brutality. He was talking about getting the bad guys out there committing crimes right now off the street. This isn’t hard. But at The Root, every discussion of law enforcement must toe the line of the BLM/ACAB narrative. The left is more than willing to eat their own in service of the narrative.

In creating a false narrative, consistency is key. Any deviation from orthodoxy might bring to light the lies that pepper the narrative. The left knows this and keeps its own soldiers under strict discipline. Piety to the leftist cause is not optional for those who wish to take on the fight for “social justice.”

The Root serves the particular purpose of a sort of secular-leftist inquisitor regarding race. The race-based part of the liberal narrative must pass their scrutiny and judgment. Leftism has always had a race obsession, making it essential to their arguments. Therefore, The Root must make sure everyone is on the same page.