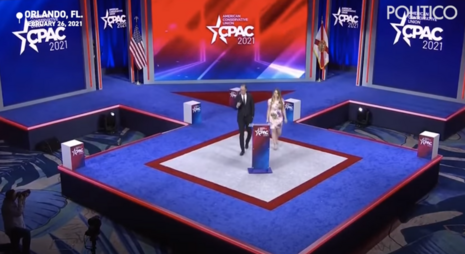 Oh Boy! Leftie nonsense over CPAC is at it again. This time bashing the Hyatt hotel chain that hosted the “fascist Nazi convention.”

Over the weekend, the Conservative Political Action Conference (CPAC) was held at the Hyatt Regency Hotel in Orlando, Florida. Since this is a conservative gathering and all things right-wing are “the antithesis of inclusiveness,” Hollywood elites who think their opinions deserve a pedestal were quick to go after the hotel themselves for allowing the right inside and for supposedly having the shape of the stage resemble a symbol seen on Nazi uniforms.

Hey Hyatt hotels. Highly inclusive ,does not mean hosting people who are NOT highly inclusive ,hosting a fascist Nazi convention is the antithesis of inclusiveness .you have made a grave error in judgement .the imminent Boycotts you are going to feel for years to come.

Actress Alyssa Milano was particularly in support of the Hyatt boycott and brought her tantrum to multiple media platforms. 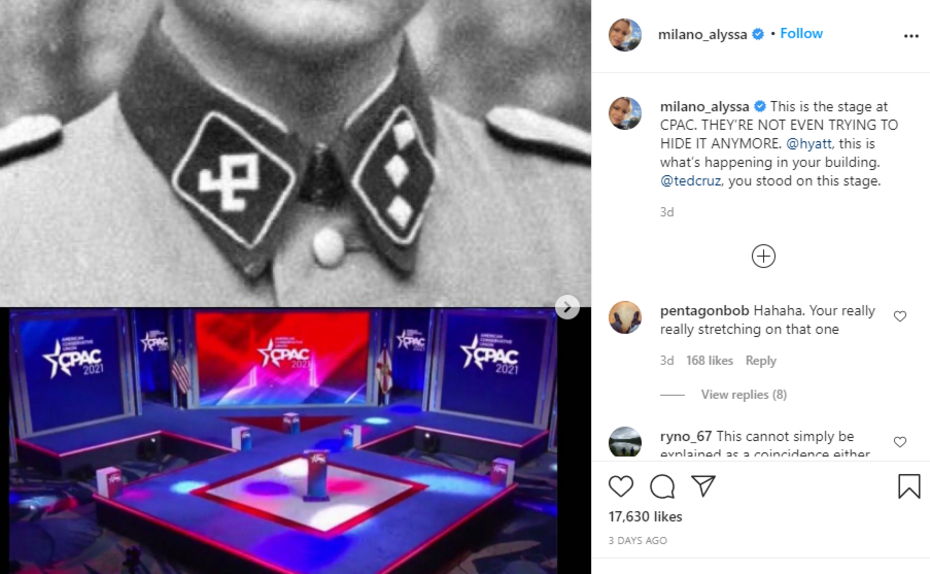 Milano shared the image likening the CPAC stage shape and the Nazi Odal rune symbol on her Instagram and later tweeted her continued distaste for Hyatt when they didn’t immediately denounce CPAC. #boycottHYATT even became a trending tag.

Luckily, conservatives like lead organizer of CPAC Matt Schlapp were quick to rebuke the ridiculousness of these far lefties.

Stage design conspiracies are outrageous and slanderous. We have a long standing commitment to the Jewish community. Cancel culture extremists must address antisemitism within their own ranks. CPAC proudly stands with our Jewish allies, including those speaking from this stage.

But, Schlapp’s response, since he’s a conservative, was undoubtedly not satisfactory for Tinseltown. Arquette and Milano are celebrities already in the spotlight, yet, they’re still trying to involve themselves in more unnecessary situations. Neither of them were even at CPAC so why do they care so much about the unintentional shape of the stage anyways?

Hyatt eventually blamed the American Conservative Union after the backlash began and requested all further issues regarding the event be sent to CPAC. They didn’t want to deal with the problem because “such symbols are abhorrent and unequivocally counter to our values as a company.” What a load of crap.

David Safavian of ACU wrote a response to Hyatt's Executive Chairman Thomas Pritzker succeeding the event. “Contrary to Hyatt’s own mission statement of inclusivity, your company just attacked its own customer by caving into the pressures of the politically motivated social media agitators who seek to destroy CPAC.” ACU was appalled that Hyatt waited until after CPAC was accused of antisemitism and despite months of logistical planning, Hyatt never raised concerns about the collaboration. As Safavian said, “You recruited us.”

Hyatt agreed to have the event but now they are bashing everything it stands for ... scared much? With the CPAC 2021 theme being “America UnCanceled” it’s disgusting that Hyatt “would choose to abandon its own mission statement of inclusivity and play into the hands of those who are attempting to silence legitimate political views.” Hyatt couldn’t stand the thought of being cancelled by Hollywood’s elites so they went back on their word with CPAC.

But, like Arquette said, they’re going to receive boycotts for “years to come” (unlikely anyone remembers this past next weekend) and if it wasn’t clear already, drama is something the left clearly excels at so that's no surprise here.