Chock full of obscenities, clowns and weed, Snoop Dogg’s new music video has a nightmarish quality to it. Oh yeah, and the rapper shoots Donald Trump with a fake gun at the climax. But that hardly fazed the media.

The pot-smoking hip-hop icon talked with Billboard’s Adele Platon about his project, noting that it was inspired by recent events.

"I feel like it’s a lot of people making cool records, having fun, partying, but nobody’s dealing with the real issue with this f--king clown as president,” the rapper said.

Snoop Dogg insisted he wasn’t fishing for a reaction, but the video’s violent, drug-filled clown world makes that hard to believe. In it, an upstanding clown man gets pulled over and shot by a policeman (with a glitter gun) after revealing he also has a firearm. Later, Snoop Dogg pulls a fake gun on clown-faced "Ronald Klump," who appears chained up later in the clip.

“The whole world is clownin’ around,” Snoop Dogg explained. “If you really look at some of these motherf--kers, they are clowns. The ban that this mother--ker tried to put up; him winning the presidency; police being able to kill mother--kers and get away with it …”

The rapper, for one, clearly got away with his violent fantasy about shooting Trump. Platon seemed unfazed by that particular disturbing scene, writing that it “may be controversial to some critics.” 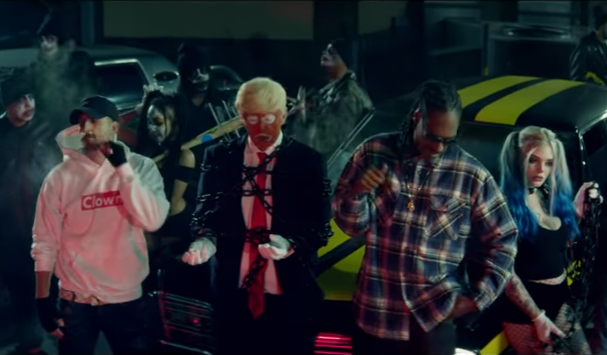 Not to Entertainment Weekly’s Christian Holub and Slate’s Matthew Dessem, who didn’t even mention the scene, although both commented on the police shooting. To Dessem, the video’s “lurid effect actually feels about right for this moment in time.”

Rolling Stone’s Ryan Reed did comment on the presidential shooting, but sounded far from condemning. In fact, the tone of his article, titled “Watch Snoop Dogg Aim Gun at Clown-Trump in ‘Lavender Video,’” was difficult to determine.

Something tells us that the reaction might have been more intense if a white rapper aimed a gun at President Obama.