After the election, many liberal celebrities cried “Resist!” Yet, a few brave ones called “embrace.” 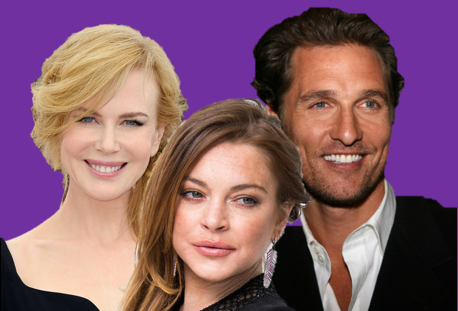 Despite Hollywood’s overwhelming anti-Trump bias, several stars have urged accepting President Trump and moving forward. But they haven’t done so without getting flack from fans in return.

On February 10, singer Lindsay Lohan gave a surprising defense in a Facebook Live conversation with the Daily Mail. “He is the president – we have to join him,” she said. “If you can’t beat him, join him.”

In an interview with BBC’s Andrew Marr about his new film Gold, Matthew McConaughey shared a similar opinion: “He’s our President… It's time for us to embrace and shake hands with this fact,” he continued, “and be constructive with him over the next four years."

Actress Nicole Kidman also aired this common sense view. “He’s now elected, and we as a country need to support whosoever the president because that’s what the country’s based on,” she told BBC.

But Kidman could not make this nonpartisan statement without criticism. So much criticism, in fact, that she felt it necessary to clarify. "I was trying to stress that I believe in democracy and the American Constitution,” she explained, “and it was that simple."

On the other hand, celebs like comedienne Sarah Silverman and actress Lena Dunham have continued to advocate protesting and resistance.

On February 1, Silverman urged her nearly ten million followers to overthrow the government with the dramatic rant: “WAKE UP & JOIN THE RESISTANCE. ONCE THE MILITARY IS W US FASCISTS GET OVERTHROWN. MAD KING & HIS HANDLERS GO BYE BYE.”

The following day, Dunham posted a screen clip of the dictionary definition of “protest” on Instagram. Her caption read: “Protest works. Thank you to everyone out there with their bodies and souls today, fighting for what we know to be right.”