As inauguration festivities got under way, celebrities began to weigh in with final thoughts on the Obamas, the incoming administration and the nation’s impending doom. 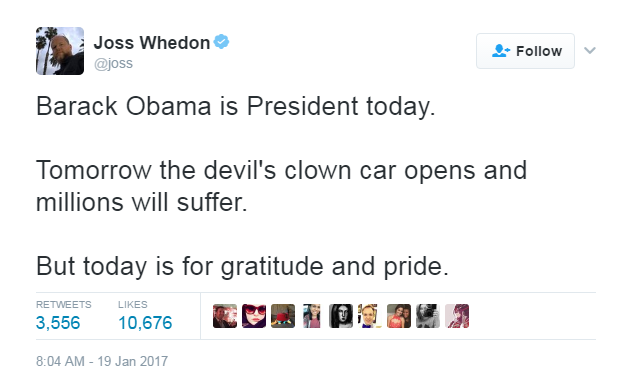 Director and scathing Trump critic Joss Whedon managed to reflect all of those sentiments in a January 19 tweet. “Barack Obama is President today,” he wrote. “Tomorrow the devil’s clown car opens and millions will suffer. But today is for gratitude and pride.”

On instagram, Monae posted a picture of herself with the first couple, calling them the “one true king and queen of the North.” Henson posted a similar pic, noting that she “wanted to grab their ankles and beg them NOT TO LEAVE!!!!” Ross suffered more intensely, writing that she was already “starting to hyperventilate” and that “panic” was “definitely setting in.”

Comedian Chelsea Handler wasn’t ready to say goodbye. She still clung to the hope that Obama would remain in the White House, tweeting: “Gambia’s president refuses to leave office, despite his expired term. Obama. DID YOU HEAR THAT? #4moreyrs.”

Trump’s defeated opponent also got some shout-outs. On Instagram, writer/producer Lena Dunham posted an assortment of rainbow-hued Hillary Clinton photos with the caption: “Have you seen her in all her gold? Like a queen in days of old…Have you seen a lady fairer?”

Have you seen her all in gold? Like a queen in days of old She shoots colors all around Like a sunset going down Have you seen a lady fairer? #whyimarch

Some celebs resisted the incoming administration by ignoring it. “You can’t make me watch,” LGBT activist Dan Savage tweeted, while singer Katy Perry said she’d be sleeping in.

Actor Don Cheadle tweeted a plain black square as a symbol of mourning, but couldn’t beat the doomsday feel of Michael Ian Black’s post: “Definitely don’t want to exaggerate but the world ends at noon.”