More than 15 public figures have stooped to comparing Donald Trump to history’s most infamous Nazi dictator – but at what cost?

Perhaps we're seeing where that kind of hate takes the nation. "A firebomb tore through the Republican Party headquarters in North Carolina’s Orange County on Saturday night." The attack included graffiti comparing the GOP to Nazis: "Nazi Republicans leave town or else," it said, according to The New York Times.

That type of comparison has become commonplace this election. According to Forbes columnist and author James Crotty, such illegitimate parallels cheapen the Holocaust. However, Bill Maher, Sarah Silverman and other big names have gloried in the idea that Trump likens to Adolf Hitler. By doing so, they reveal their utterly reckless use of speech or worse – the belief that brashness and racism can actually compare to mass murder and torture.

Even Anne Frank’s stepsister Eva Schloss – who should understand the great import of what she is saying – told Newsweek: "I think [Trump] is acting like another Hitler by inciting racism." Unfortunately, Schloss is joined by many – particularly in the realms of Hollywood, comedy and politics – who believe that the comparison is legitimate.

Hollywood: Where Clinton’s the Angel and Trump’s the Nazi

Tinsel Town is the land of extreme liberals. In fact, the folks in Hollywood have been paving the way for a Hillary Clinton presidency for decades, while more recently, anti-Trump content has flooded TV. But Hillary is not just celebrities’ favorite candidate. Many seem to actually worship her. In the same way, Trump is not only unfavorable, but has been branded as appalling as Hitler himself. 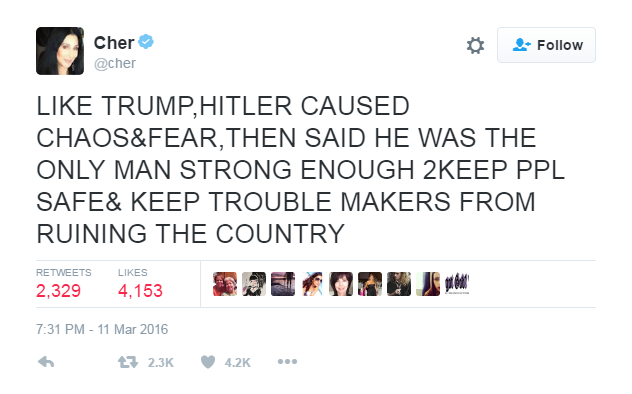 Singers Cher and Billie Joe Armstrong attacked Trump for inspiring fear and anger. An avidly vocal opponent of Trump over social media, Cher tweeted in her characteristic all-caps style: “LIKE TRUMP,HITLER CAUSED CHAOS&FEAR,THEN SAID HE WAS THE ONLY MAN STRONG ENOUGH 2KEEP PPL SAFE& KEEP TROUBLE MAKERS FROM RUINING THE COUNTRY.” Armstrong agreed, telling Kerrang! Magazine: “He’s preyed on their anger…He just said, ‘You have no options, and I’m the only one, and I’m going to take care of it myself.’ I mean, that’s…Hitler, man!”

At the 2016 Emmy Awards Ceremony, writer and director Jill Soloway (Transparent) accepted the honor of “Outstanding Director for a Comedy Series,” before riffing on the Republican candidate. “He's a complete dangerous monster, and at any moment that I have to call out Trump for being an inheritor to Hitler, I will," she warned.

Director and producer Spike Lee aired similar sentiments in a conversation about Trump’s views toward Muslims. “And he wants to close down mosques now,” Lee told The Daily Beast’s Marlow Stern. “That’s like the Nazis. That’s like Hitler, Mussolini, the Axis Powers. You can’t do that.”

But these Hollywood fixtures aren’t just speaking out via the media; they are using their craft to communicate their views. Regarding his new anti-Trump PSA, director Joss Whedon told BuzzFeed about his efforts to recruit team members: “There is almost nobody that I wouldn’t approach to say, ‘If you can pitch in, do it now.’ It was pretty much the same spiel to everybody: ‘Doing a voting PSA to help get out the vote and stop orange Muppet Hitler.’” Plenty of actors were eager to aid Whedon in his mission. Robert Downey Jr., Scarlett Johansson and Neil Patrick Harris were some of the willing.

Actresses Eva Longoria and Cyndi Lauper also approached the comparison, calling out Trump’s brashness. "What I think he doesn't understand and what people don't understand is words create emotional poison,” Longoria opined to E!’s Marc Malkin. “Hitler moved a nation with words, just words.” Lauper aired similar sentiments in an interview with San Diego’s Morning News. “That guy is selling inflammatory things that I have never in my whole entire life heard, except, you know, Hitler,” she commented. 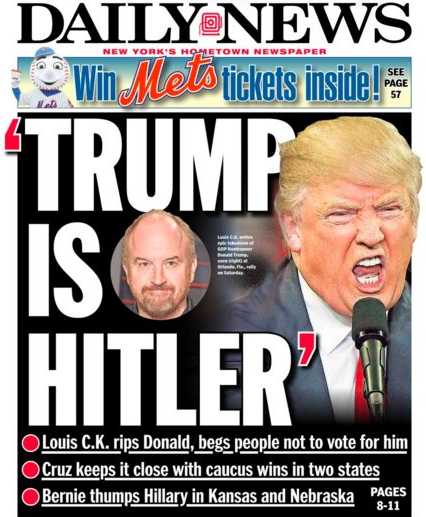 From late-night shows to stand-up routines, the comedy world thrives on lampooning the persona of Donald Trump. Yet, the humor has surpassed his hair and brashness, and has now marched directly into the territory of the Third Reich.

Mentioning the NY Daily News article “Trump is Hitler,” Conan O’Brien had “Hitler” (Sarah Silverman) come on his show to address the comparison. Silverman, in full Nazi regalia, declared, “90% of what he [Trump] says, I’m like, this guy gets it!” After calling the candidate’s communication style “crass,” Silverman’s Hitler declared, “He’s starting to make me rethink some of the things I’ve done.”

Comedian and pundit Bill Maher went just as far, citing a 1990 Vanity Fair article claiming that Trump kept a book of Hitler speeches by his bedside table. Maher then played some of Hitler’s speeches with English subtitles to help his audience determine whether Trump had been influenced by the German dictator. Of course, Maher’s staff had “translated” Hitler’s words into statements like “Make Germany great again” and “There’s gonna be so much annexing, you’re gonna get sick of annexing.” A particularly awful subtitle read: “So we’re gonna have to build a camp. And I will make the Jews pay for it.”

Discussing Trump’s campaign, comedian Louis C.K. told Charlie Rose, "It was funny for a little while. But the guy is Hitler. And by that I mean that we are being Germany in the '30s. Do you think they saw the shit coming?”

Some comedians, like John Fugelsang, went even further, implying that the Republican presidential candidate is even more deplorable than Hitler. On September 19, 2016, Fugelsang tweeted, “Hitler didn't lie to get 5 deferments to avoid serving in a war he supported.”

Politicians: ‘The Parallels Are Chilling’

Even politicians drew the parallel.

In a phone interview with CNN’s Anderson Cooper, former Mexican President Vincente Fox warned that Trump would “take that nation (America) back to the old days of conflict, war and everything. I mean, he reminds me of Hitler.”

Former New Jersey Governor Christine Todd Whitman wrote similarly in her December 2015 Politico op-ed. However, unlike the aforementioned people, she compared other conservative candidates to tyrants as well. “It is no longer a stretch to compare Donald Trump, and some of the other current Republican candidates for president, to some of the worst dictators in history,” she wrote. “Trump especially is employing the kind of hateful rhetoric and exploiting the insecurities of this nation, in much the same way that allowed Hitler and Mussolini to rise to power in the lead-up to World War II. The parallels are chilling.”

When Hyperbole Is Dangerous

Author James Crotty is no fan of Trump. But he’s also against “rhetorical desensitization” and the havoc it can wreak in the public forum. That’s why he has spoken out so strongly against the Trump-Hitler parallels that have flooded the media during the Republican candidate’s campaign.

In a piece for the Huffington Post, Crotty argued: “When we apply a Nazi comparison to someone or something that does not fit that comparison, then Nazism and the Holocaust lose their power to shock us.” And that’s when hyperbole becomes extremely dangerous.