It takes a toll on one’s psyche and mental health, and President Biden has accidentally revealed just how strenuous undermining the United States can be.

According to the Post Millennial, during a meeting on Thursday, Biden was seen holding an official White House “cheat sheet” with simple instructions such as when to say “hello” and when to “sit down.”

Here's a closer look at the card he held: 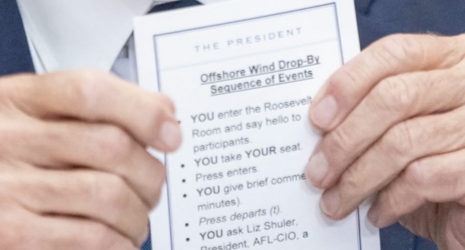 The cheat sheet was inadvertently exposed during Biden’s remarks during a “Meeting on Federal State Offshore Wind Implementation Partnership” as a part of his binder filled with talking points, which included a chart showing how tall the offshore wind turbines are compared to the Eiffel Tower and Empire State building, as reported by Fox News.

The instructions on the card showed that the current commander-in-chief could not do the most basic tasks by himself, including instructions such as: “YOU enter the Roosevelt room and say hello to participants, YOU take YOUR seat, press enters, YOU give brief comments (2 minutes), press departs, YOU ask Liz Shuler, President AFL-CIO, a question, YOU thank the participants, YOU depart.” So President Biden has questions lobbed at him and needs to be told when to leave. Is this not the man who campaigned to “put the adults back in charge”?

President Biden’s mental fortitude seems only to worsen as time goes on.