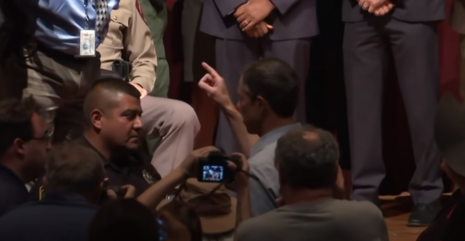 Following the horrific shooting in Uvalde, Texas, Governor Greg Abbott (R) held a press conference Wednesday that provided details about the deadly shooting. As important information was being discussed, Beto strode to the front of the audience and interrupted Governor Abbott bawling that the mass shooting was his fault.

He’d turned a grim press conference into political theater. Beto was escorted out of the conference, booed by parents and community members. To Teen Vogue, though, Beto is a hero.

Specter depicted Beto as the voice of an angry community. “It was cathartic to see O’Rourke express some fraction of the frustration and rage that people across the country are feeling in the wake of the shootings in Uvalde, Buffalo, Laguna Woods, and every other U.S. city that has become associated with a senseless and unimaginably traumatizing mass shooting,” she wrote.

Specter continued to justify Beto’s political stunt as a punishment for Texas Republicans: “We want the people we elect to represent us to pass sensible gun legislation that will make it harder for our children and their teachers to be slaughtered in their classrooms — and if they can’t or won’t, they shouldn’t enjoy the privilege of uninterrupted public appearances.” Teen Vogue wants to make sure its audience knows it's alright to exploit tragedies for one’s political gain.

His lack of respect for those mourning shows the left’s willingness to exploit tragedy for their political gain. Teen Vogue is sensationalizing those who stand on massacred children.