“Conscience doth make cowards of us all,” Hamlet observes. He’s right, of course, but so does wokeness. And wokeness goes one better, making virtue-signaling weenies of us all.

It certainly has for D.C.’s Folger Shakespeare Library, which runs the online game Prattle. Prattle is like Wordle for Shakespeare buffs. You guess the letters to eventually discover the answer word, which has to appear in Shakespeare’s works. 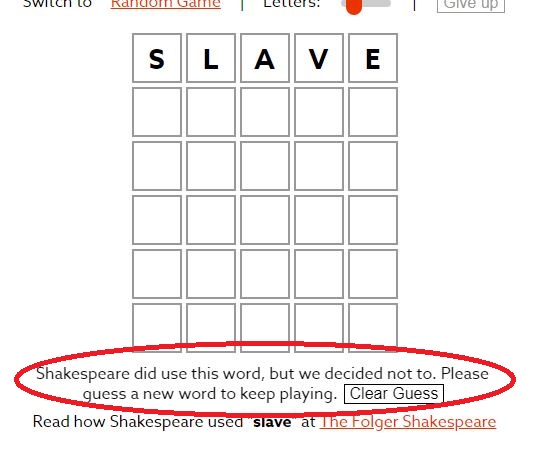 Yes, Billy Shakes used the word “slave.” A keyword search of OpenSource Shakespeare finds 173 uses of it across his works. You try writing about ancient Rome or Greece or Egypt without it. But the Folger Library has decided to censor it because … well, did I mention they’re cowardly, virtue-signaling weenies?

Reason quotes former Marvel Comics Editor in Chief Roy Thomas, a Prattle player, saying "This is the worst kind of pandering, the more so by a company supposedly devoted to major English-language literature."

Verily. "This anti-free speech, anti-intellectual, anti-common-sense action deserves all the scorn it can get," Thomas said.

Yeah, whoever made this decision is an ass and a fool and a prating coxcomb.