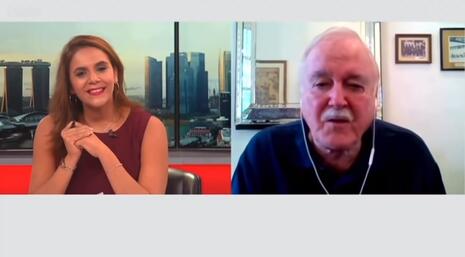 The Monty Python founder and Fawlty Towers star recently agreed to an on-air interview with BBC World News to talk about upcoming shows he’s doing in Asia. But, as we learn from Bounding Into Comics, interviewer Karishma Vaswani was more interested in Cleese’s upcoming documentary on woke cancel culture and what it’s doing to comedy.

He explained why he’s interested in the subject, saying “it’s a relatively new phenomenon, and of course it affects comedians because a lot of us do jokes that the cancel culture people … woke people don’t think are right, or don’t think are correct.”

Cleese said cancel culture is “quite a complex matter, and it seems to be boiling down to the fact that … I think some people are rather overprotective.”

I think it’s very important that things should go wrong and that minor bad things should happen, because that helps people to learn to become a little bit tougher when they go out into the world, which is not a terribly friendly place a lot of the time.

Vaswani wanted an argument. She called his views “old-fashioned” and accused him of not “taking into consideration the feelings of people who have been hurt,” by … well, jokes.

She then tried to bait him with a question: “For instance, in Britain, where racist behavior was couched as a bit of banter … is that acceptable in your view as a joke?”

Related: ‘Woke Watching’ Christmas Classics: Why Let Lefties Have All the Fun?

Nice try, but Cleese wasn’t having it. “I think it’s a very poor question,” he said. When she pressed, he said, “Well, it’s hard because it’s so scattered, and it has so many different ideas in it, and I don’t know which place to start with to answer it.” And anyway, he was there to talk about shows in Asia.

He did try to explain to Vaswani that his ideas are informed by cognitive behavioral therapy and “it doesn’t matter whether that’s old-fashioned or new-fashioned or even from the early 12th century.” He said that ideas should be explored and discussed “without using these emotional terms like ‘people being hurt’ and all these kinds of things.”

Later, when Vaswani came back to the subject and brought up Dave Chapelle, he interrupted. “We’re back on cancel culture here … I thought we were going to be talking about shows and comedy but I’m not interested in doing this interview anymore, so I’ll leave you now. Bye-bye.”

Afterward on Twitter, Cleese said “Karishma had no interest in a discussion with me. She wanted only the role of prosecutor.” And he said he was “formally complaining to the BBC about the deception, dishonesty and tone of this interview.”