Warning: This column runs beyond the left edge of the map. Here there be monsters.

“If a man is not a socialist at 20, he has no heart. If he is still a socialist at 40, he has no brain.” And if at 17 a girl thinks socialism is “where the community (rather than rich people) have ownership and control over their labor,” she’s been reading Teen Vogue. 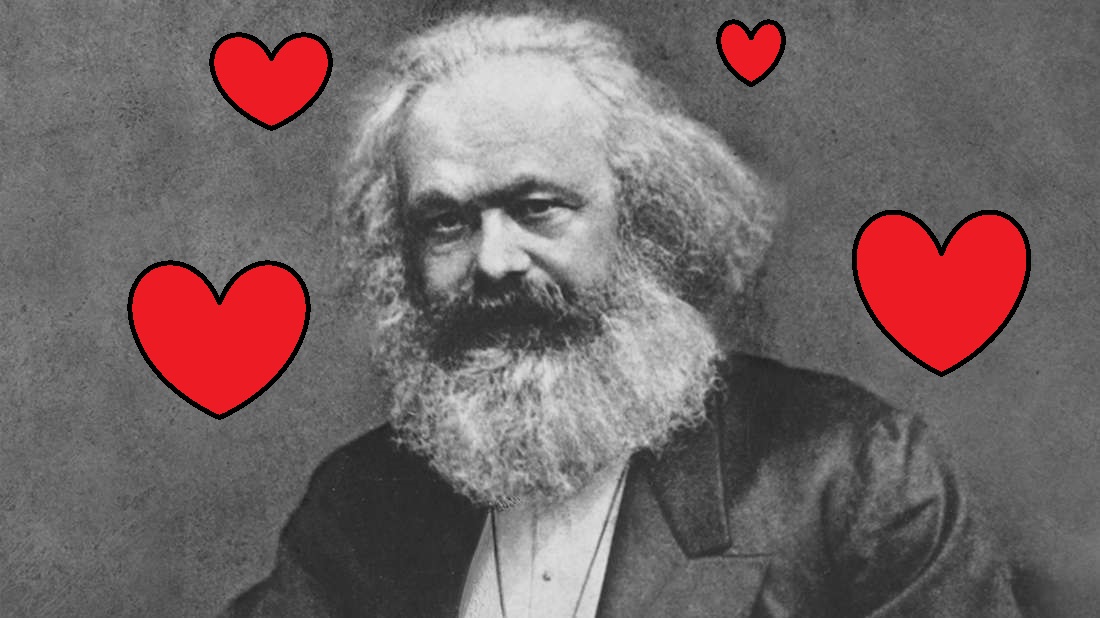 Sure, there are drawbacks to introducing Teen Vogue’s discerning readers to Uncle Karl, “the famed German [who] co-authored The Communist Manifesto with fellow scholar Friedrich Engels in 1848,” as Teen Vogue described him. For one thing, despite the hipster beard, his fashion sense was strictly proletarian -- and not in the cool, street way. And he did most of his writing in a public library. I mean, what kind of dweebs are gonna see you write your deep thoughts in a library? Had they no coffee houses? No smoothie bars?

But Teen Vogue’s Danielle Corcione was undaunted because Marx’s ideas “later inspired millions of people to resist oppressive political leaders and spark political revolutions all over the world.” Cool, like #resist, right? Besides, Teen Vogue has a go-to educator in it’s Rolodex: “Former Drexel University professor George Ciccariello-Maher,” who was fired from Drexel for tweeting “All I Want For Christmas Is White Genocide.” And you can tell Ciccariello-Maher is a professional teacher because he makes sure his meaning is clear. He followed up that tweet with: “To clarify: when the whites were massacred during the Haitian revolution, that was a good thing indeed.”

“So how can teens learn the legacy of Marx’s ideas and how they’re relevant to the current political climate?” Corcione chirped.

Those are just a few living examples. There are also 100 million dead ones.

Strangely, Corcione didn’t mention any of that. Instead, she “chatted with two educators about how they apply these concepts to current events in the classroom.” (Chatting’s nice, especially with white genocide advocates -- sparkling conversationalists!)

In his advanced class, Brunt teaches such Marxist terminology as “false consciousness.” “False consciousness is when you think that the social conditions are different than they actually are,” he says. “You’re tricked into thinking your allies are different and your enemies are different than they actually are.” The kids might be interested in some other terms associated with Marxism: “show trial,” “Great Leap Forward,” “Cultural Revolution,” “killing fields,” “re-education camps,” “gulags,” “Ukrainian Famine,” “the purges” “the Stasi” … I could go on, but I don’t imagine Brunt spends much time on them (”useful idiot” is another good one.)

What did Ciccariello-Maher have to say? “He uses Marx to teach history through an emotional, fluid, and ever-changing lens,” Corcione wrote. Sounds like a terrific way to make sure nobody learns anything, but when mass murder is your thing, maybe that’s good.

Anyway, Ciccariello-Maher just hates America and its economic system. “There’s this myth of the free market, but Marx shows very clearly that capitalism emerged through a state of violence,” he told Corcione. “Some examples of violence that aided in the establishment of capitalism in the United States include stealing the land of Indigenous people and trafficking Africans through slavery,” she wrote.

So American capitalism is responsible for violent crimes. Marxist thought “inspired millions of people to resist oppressive political leaders.” Our teens are in good hands.

And now, more siren songs from the sea nymphs of socialism ...

I take exception to that, Ilsa. Remember when John “Jenjis Kahn” Kerry was running for president and Dan Rather was slowly imploding the Evening News? Good times. Conversations with liberals in those days often went like this:

“I think it’s important to support the war.”
“Are you questioning my patriotism?”

“I think it’s important to support the troops.”
“Are you questioning my patriotism?”

No more. The left isn’t interested. In fact, they're downright impatient with patriotism. Writing at Alternet, someone named Sam Haselby has decided that “These Should Be the End Times for American Patriotism.”

Why? Because Haselby says American patriotism is “the most deadly form of identity politics.” And anyway, he doesn’t understand it, so it should go away.

Patriotism is the organizing passion of modern political life in the United States yet its vitality defies obvious explanation. The country has no national education system. [Huh? If only!] There’s neither compulsory military nor civil service. No government agency distributes the ubiquitous US flags, nor enforces observance of the rituals to country performed at schools and sporting and political events throughout the country. Despite lacking the classic machinery for inculcating patriotism and spreading it among the people, American patriotism is a norm in the true sense: at least within the US itself, it exists in a place without question.

Funny, there’s no compulsory work on dairy farms, and we don’t sing the Wisconsin state anthem at baseball games (that’s the one about blackberry schnapps, isn’t it?), and the government only gives blocks of cheddar to the neediest -- if it even does that anymore. Strangely, though, I love cheese. I love it without Big Dairy or the government convincing me I should. (Save your “dairy subsidy” rants please.) 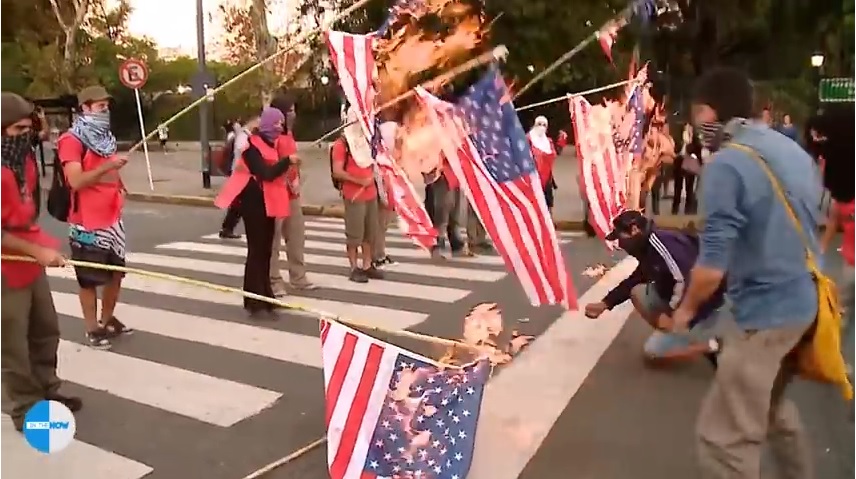 Only a lefty could find an organic, unforced love of country inexplicable. Haselby can’t imagine that it’s a real emotion, that someone can be grateful for the gifts of being American. Then there’s this whole “American Exceptionalism” thing. Haselby’s heard of it, had it explained to him maybe, but he doesn’t seem to know how it operates.

This core component of American patriotism – the popular conviction in a world-historical role for the US – is unlikely to continue. First, it is increasingly difficult not to notice that in many basic matters of government and society, including healthcare, public education, gender equity, social mobility and prosperity, economic fairness, childcare, environment and more, the US has fallen behind most of the developed world.

By his standards, I suppose this is correct. If your ambition is to live as a Scandinavian woman (and don’t tell me that’s not what most progressives aspire to) then the U.S. is going to come up short. But if you’d like to live your life as an American, America still fits the bill pretty well (the presence of wannabe Swedish chicks notwithstanding.) The problem with Haselby and too many others on the left is that he can’t imagine wanting to be American.

Quick Take: So you got that goin’ for you ... “Polyamory, sexual fluidity, and other nontraditional romantic configurations are commonplace in many queer communities, and depending on where you live, queer social circles can be small and close-knit, changing the way relationships and breakups operate.” -- Queer Women Are Better at Breakups from Vice.

OhhhmmmyGod, you’re not serious? Ya know what kids in public schools need? Ten -12 more minutes of not learning. They should be spending that time … meditating. Stop laughing. This is SCIENCE™! Sort of.

An article at Alternet argues that our little scholars should take time between tossing out their Michelle Obama-approved lunches and reading about Heather’s Two Mommies for a few “ohhhmmms.” It will make them “focused, calm, quiet, settled and rested — by providing them an opportunity to learn to relax and reflect.” Because 8-year-olds have so much to reflect on.

How do they know this? Well, 93 students in a third-year college business ethics course who got to meditate in class,

Initially, these students found it challenging to control their “monkey minds” during a 10 minute meditation.

Interestingly, with practice over three months duration, 10 minutes became short for them, and they felt motivated to practice more at home.

For most of the students, meditation was a first time experience, and gradually they began to feel calmness and equanimity. Meditation allowed them to know themselves better, helping them feel more relaxed and peaceful. It seemed to increase students’ level of physical, mental and emotional awareness.

Couple of things here: First, you better have tenure and a good lawyer if you’re going to tell a roomful of racially diverse kids they’ve got to control their “monkey minds.” Second, they’re called “daydreams,” not “waking dreams,” and they’ve been the enemy of kids learning since hunter-gatherer days.

But perhaps I’m too cynical. There must be trusted medical experts who agree with the authors.

We also spoke informally with Dr. Deepak Chopra, alternative medicine advocate, public speaker and writer, during a conference in Tuscon, Arizona, in 2016. He unveiled regular meditation as the most important factor behind his charismatic personality and high level of energy, in the context of his extremely busy and socially-committed life.

Wow, celebrity wellness expert and semi-professional Oprah guest Deepak Chopra told them the secret to being a busy, high-energy, charismatic and socially-committed guy like himself is regular meditation? He hadn’t perhaps written any books on the subject that might be available for purchase?

Quick Take: Hmm. There was this guy in literature who wasn’t “beholden to biological imperatives” … what was his name? Frank N. something or other. “This shifting [trans-whatever] vocabulary underlines the truth that we, as humans, are not beholden to biological imperatives; we, as a society, can determine what it means to be masculine and what it means to be feminine.” -- “How evolving trans terminology around sex and gender can help us all” in Slate.