Stop me if you’ve heard this before: Someone exposes the hate and hypocrisy of the super-tolerant left and is mercilessly punished for it. In this case, it’s an award-winning LGBT reporter for a gay newspaper who stumbled on gay activists’ antisemitism and is a reporter no longer. 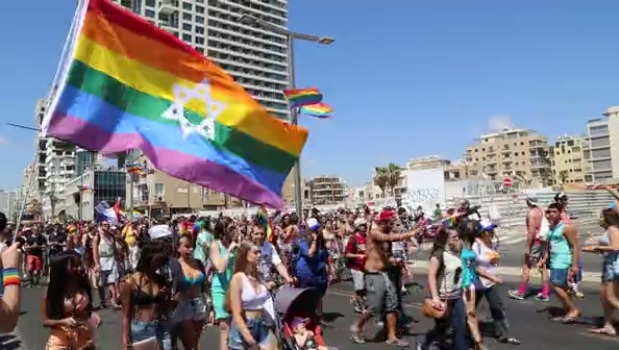 Back in June, transgender reporter Gretchen Hammond of the LGBT newspaper Windy City Times covered the Chicago Dyke March, a “Pride” parade organized by people who find the regular Chicago Pride Parade too conservative, or something. Hammond broke the news that organizers had banished several people who carried Star of David rainbow flags. According to Hammond’s report, “the women were told to leave because the flags ‘made people feel unsafe,’ that the march was ‘anti-Zionist’ and ‘pro-Palestinian.’” One of those forced to leave told Hammond “she lost count of the number of people who harassed her” over the flag.

Not a good look for the “Love Wins” crowd. But those who insist that people be viewed as members of groups or classes, as opposed to individuals, also get to choose which groups or classes are worthy of toleration. The criteria used to judge that is two-fold: the perceived grievance and victimhood status of the group (more = better), and the amount of room within it for ideological and political pluralism (more = worse). Supporters of Israel's right to defend itself -- heck, its right to exist at all -- fail on both counts. (It's worth noting that U.S. flags are also banned from the Dyke March.)

Since hell hath no fury like a marching dyke with her intolerance laid bare, Hammond was subsequently removed from her reporter job and was working in Windy City Times’s ad sales department while “looking for editorial work elsewhere,” according to The Tablet.

That, of course, wasn’t enough the “intersectionalists.” The Tablet reported that Hammond discussed her firing on July 13 at a New York journalism conference, and that night the Dyke March “tweeted a neo-Nazi slur, defended it, then deleted it.” The Tablet quoted a Facebook post from Hammond on the abuse she’d taken:

Not remotely surprised and thoroughy [sic] disgusted. They attacked me in much the same manner only using words like ” k*ke” and also said they would “make sure your bitch ass never writes in Chicago again.” Selfishly, I could claim to be vindicated by this disgusting tweet but I feel no cause for anything but the deepest shame that I ever was associated by acronym or by requirement to such vile hatred.

For their part, Dyke March organizers are both proud of their bigotry and quick to (surprise!) paint themselves as the real victims. “Zionism is an inherently white-supremacist ideology,” they said in a statement after the March. “It is based on the premise that Jewish people have a God-given entitlement to the lands of historic Palestine and the surrounding areas.”

What's more, “The threats that have been made to Chicago Dyke March and its organizers by Zionists worldwide does not even compare to the violence that Palestinians endure on a daily basis while living under Israeli military rule in the name of Zionism.”

Ah, the threats from Zionists. Because, you know, the Jews love pushing gays off the roofs of buildings … er, wait.