Wanna sleep around, but scared of wrecking your comfy marriage? No worries – according to New York Times Magazine writer Susan Dominus, you can have it all! Dominus has penned a long (12,000+ excruciating words) exploration of “nonmonogamous relationships” titled “Is an Open Marriage a Happier Marriage?” (Surprise answer: yes.) 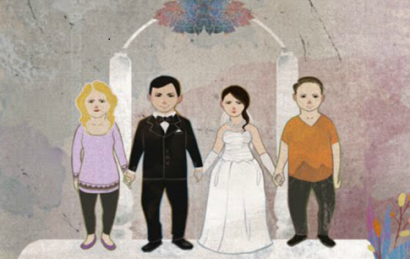 Dominus interviewed around 50 people in open relationships and, wonder of wonders, they’re all happy. It keeps their marriages sparkling. In some cases they get an extra “adult” around to help with the kids. Oh, and don’t worry about the kids. Dominus doesn’t, unless they’re teenagers “almost proud of [their parents] for doing something so alternative.”

And, horn-dogs though they are, guys aren’t the ones initiating the swinging. Dominus calls it “striking to hear so many wives risk so much on behalf of their sexual happiness.”

The author herself is in a presumably sexually unhappy, stuffy old monogamous marriage, though she seems mystified as to why. “Divorce, or not marrying in the first place, might seem like a more logical response to a desire for openness,” she wrote. “But even as marriage rates have declined in this country, the institution has retained a seductive status for Americans.”

Marriage is “seductive?” You won’t be surprised to learn that nowhere in the article (did I mention its more than 12,000 words?) does Dominus address the morality of sex outside marriage.

To be sure, open marriages aren’t for everyone. They require a certain cosmopolitan sophistication. One of the couples she talked to were “two artists living in a big progressive city, with multiple polyamory meet-up groups, broken down by age.” Theatre, symphonies, and organized boom-boom clubs – the cultural advantages of urban living. The wife in that couple “remembers sitting in her car in her driveway in Seattle, listening to an interview on [what else?] NPR with Chris Ryan, an author of ‘Sex at Dawn,’ and thinking his philosophy about the unnatural state of monogamy was speaking directly to her.”

Another poor fellow Dominus interviewed was ready to join (or, maybe, not join) his wife in pursuing extracurricular sex but “he did not live in the kind of metropolitan area with a thriving polyamorous scene, and he did not find many women eager to date a married man.” Imagine.

Still, just having the resources doesn’t guarantee you’re open to free and easy side-nookie, and that kind of perplexes the author. She’s not sure why some people are repulsed by it, even though they and their shagadelic peers share “the same relatively privileged demographic (anyone holding down three jobs to keep a family together is not likely to spend excess emotional energy negotiating and acting on a nonmonogamy agreement).” Or to read 12,000 words about those who do.

Dominus gets why conservatives wouldn’t be down with all the bouncy-bouncy, “But even among progressives I talked to, the subject typically provoked a curled lip or a slack jaw.”

Yeah, maybe because its creepy, and the behavioral or evolutionary social psychology she cites can't make it otherwise.

The subject seemed offensive to many at some primal level, or at least ridiculously self-indulgent, as if those involved — working, married people, people with children — were indecently preoccupied with sexual adventure instead of channeling their energies toward, say, their children, or composting.

Yes, yes and yes. But you don’t keep a gig writing for the New York Times Magazine by maintaining that kind of reactionary attitude, and Dominus is no fool.

So basically, anything-goes sex is for special super-liberals who’ve advanced to higher states of sensitivity. Got it. Unfortunately, Dominus gets much closer to the truth when she quotes Elizabeth, who’s affair precipitated her open marriage: “I really just felt like it was right, like it was important to my growth. It was like I was choosing to take a stand for my own pleasure and sticking to it.”