‘Catholics’ for Choice Lies about Catholics…Again 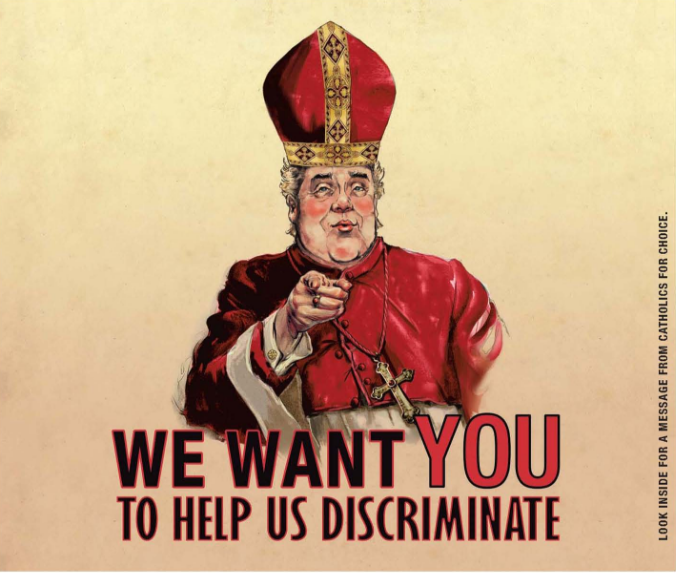 On June 21, 2017, the far-left group Catholics for Choice put an unsavory, anti-Catholic ad on the cover of The Washington Post tabloid Express, falsely accusing Catholics of “discrimination.” The aim of the ad is clear: coerce Catholic institutions into paying for abortion-inducing drugs by lying.

The ad featured a caricature of a cardinal in pre-Vatican II clerical garb, pointing at viewers. A printed inscription below the image ran “We want YOU to help us discriminate.”

The ad listed the various ways Catholic institutions supposedly ‘discriminate’ - not providing contraception at Catholic universities and workplaces, only placing adoptions with married, male-female couples, and not providing abortions at Catholic hospitals.

In The Baltimore Sun, Jon O’Brien - president of Catholics for Choice - wrote an op-ed that compounded falsity upon falsity - particularly when he made a non-existent allegiance between Donald Trump and the U.S. Conference of Catholic Bishops seem like fact. Just a day before that ad appeared in Express, O’Brien wrote the following:

“...we’ve seen over five years [the USCCB’s] real intent: to galvanize the Catholic hierarchy around an agenda to discriminate against and impose their beliefs on Catholics and non-Catholics alike. And their persistence has paid off, despite very little support or attention from everyday Catholics. Why? Because they found a benefactor unlike any other. President Trump has rewarded the bishops handily for their loyalty during the elections.”

Yet no real loyalty - in fact, no real relationship whatsoever - exists between the Trump Administration and the USCCB. Before the election, many clergy of all Christians denominations were wary of a Trump presidency. O’Brien also asserted that the so-called Trump-supporting clergy are out of touch with “everyday Catholics”, but according to a poll from the Pew Research Center, 52 percent of Catholics voted for Trump.

O’Brien listed various ways Donald Trump has supposedly “rewarded” Catholic “loyalty” - denying “funding to any organization abroad that speaks about, advocates for or refers patients to abortion services, including providers of HIV/AIDS assistance.” Yet the only federally-funded organization that provides the services listed above is Planned Parenthood, and their reach in developing countries is comparably miniscule.

And, for the record, Mother Teresa founded some of the first homes for AIDS and HIV treatment in the U.S. and abroad. You can even read about them in The Washington Post.

O’Brien also described Trump’s proposal to repeal the universally-criticised Johnson Amendment. Not naming the Amendment, O’Brien wrote on Trump’s plans to lift “restrictions that prevent tax-exempt houses of worship from engaging in partisan political activity.” Repealing the Johnson Amendment would, in reality, simply give religious and non-profit organizations the ability to speak out against any law they would find to be morally reprehensible, including legalized abortion.

O’Brien also bemoaned Trump’s move to lift the HHS Mandate - which requires, under penalty of crippling fines, that religious organizations provide abortion-causing drugs to their employees and students. Catholics for Choice clearly forgets the Catholic Church opposes abortion in all forms - including abortifacients.

The Washington Post had printed the same anti-Catholic ad back in 2015. Clearly, this far-left group finds it ethically acceptable to blatantly lie about Catholic leadership, teaching, and the convictions of “everyday Catholics.”